The Best Liars in Riverview (Hardcover) 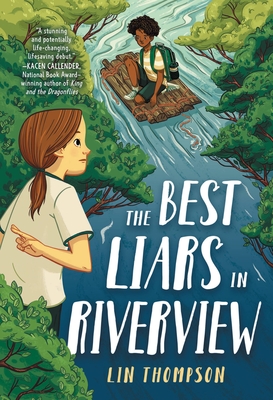 Best friends might say a few “lies of omission” to keep a secret, but Aubrey soon realizes that the very best liars are the people who are supposed to be protecting the children. An insightful perspective that will give kids the encouragement to make their world a better place. Happy endings and a lot to think about.

In the woods of a small Kentucky town, Aubrey sets off on a journey about growing up, self-discovery, and acceptance while searching for their missing best friend—perfect for fans of King and the Dragonflies and Three Times Lucky.

Aubrey and Joel are like two tomato vines that grew along the same crooked fence—weird, yet the same kind of weird. But lately, even their shared weirdness seems weird. Then Joel disappears. Vanishes. Poof. The whole town is looking for him, and Aubrey was the last person to see Joel. Aubrey can’t say much, but since lies of omission are still lies, here’s what they know for sure: Aubrey doesn’t know where Joel is, but they might know how to find him. As Aubrey, their friend Mari, and sister Teagan search along the river, Aubrey has to fess up to who they really are, all the things they never said, and the word that bully Rudy Thomas used that set all this into motion.

Lin Thompson (they/them) is a Lambda Literary Fellow of 2018. The Best Liars in Riverview is their debut novel. An earlier version of this novel received the Travis Parker Rushing Memorial Writing Award at Emerson College. Lin grew up in Kentucky but now lives in Iowa with their wife and cat.

“The Best Liars in Riverview is a beautiful and heartwarming exploration of self-discovery. Lin Thompson writes with love and respect for their readers, and I’m excited for the young people who will have the chance to read their story. A stunning and potentially life-changing, life-saving debut.”

"The Best Liars in Riverview is a lyrically told tale about friendship, found family, belonging and hope. Thompson has crafted a gorgeous debut that will fill an important place on LGBTQ+ shelves, and Aubrey is a character that will stay with me for a long time."

"A beautifully written, nuanced exploration of identity, The Best Liars in Riverview is heartbreaking at times in the truths it reveals about growing up and feeling different in a rural community. It also offers so much comfort and hope. Thompson's debut is a lyrical, wonderfully queer story that will forever hold a special place in my heart."

—A. J. Sass, author of Ana on the Edge and Ellen Outside the Lines

"Tender and bold all at once, Thompson's breathtaking debut about found family and identity will infuse readers hope and courage. A luminous read."

“A dazzlingly atmospheric debut about truth-telling made possible through found family and self-discovery. Lin Thompson writes with heartfelt incisiveness about the pain of alienation, the preciousness of friendship, and the empowerment that comes through being seen and believed. Aubrey left an indelible mark on my heart, and their riveting story will encourage young readers everywhere to “say something” when the time is right.”

—Kathryn Ormsbee, author of The House in Poplar Wood

“A sensitively written first novel…this heartfelt story shows rather than tells how friendship can lead to understanding.”—Publishers Weekly

* “Thompson’s debut is a heartfelt coming-of-age journey that explores identity, friendship, and learning to accept who you are, even if you don’t quite understand it yet.”—Booklist, starred review

“Thompson’s tale will have readers guessing up until the very end. A gratifying middle grade read for students who enjoy tales of adventure and belonging.”—School Library Journal