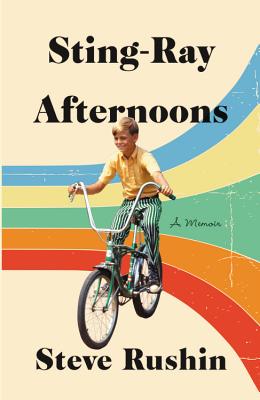 A terrific trip back to the 1970s. A feel-good memoir that will instantly transport readers back to a time before cell phones, tweets and texting, when a kid could be carefree with no helicopter parents hovering around. It’s clear Steve Rushin thoroughly enjoyed recollecting his Midwestern youth – including the TV shows, fads and toys of the day- in this funny and sweet book. Along the way, he takes readers for a ride to a simpler time that most will undoubtedly long for, complete with a very close-knit, loving family.

This is a story of the 1970s. Of a road trip in a wood-paneled station wagon, with the kids in the way-back, singing along to the Steve Miller Band. Of brothers waking up early on Saturday mornings for five consecutive hours of cartoons. Of growing up in a magical era populated by Bic pens, Mr. Clean and Scrubbing Bubbles, lightsabers and those oh-so-coveted Schwinn Sting-Ray bikes. And of a father -- one of 3M's greatest and last eight-track salesmen -- traveling across the country on the brand-new Boeing 747, providing for his family but wanting nothing more than to get home.

"Funny, elegiac... a remarkably sunny coming-of-age story about growing up in a Midwest world." -- NPR

One of the Best Books of the Year: Amazon, Gold Digest, Minnesota Public Radio—-

"If you existed in the 1970s and had any awareness of the world around you, Steve Rushin's Sting-Ray Afternoons is going to hit you like the smell of Clairol Herbal Essence Shampoo. Smart as heck, laugh out loud funny and warm, Steve Rushin does for 1970s childhoods what Jean Shepherd did for 1940s Christmas. This book is nothing short of a Nadia Comenici Perfect 10."—Julie Klam, author of The Stars in Our Eyes and the New York Times bestseller You Had Me at Woof

"Steve Rushin's Sting Ray Afternoons is a fun and often hilarious account of growing up in the midwest in the 1970s. Throughout the book I was pleasantly reminded of things from my own past-Rushin revisits the TV shows, the toys, the games of the era while telling his family's own story. Sting Ray Afternoon captures both the freedom of youth and the universal longing for experience in a bigger, more adult world. If you grew up in the 1970s, prepare to have your memory triggered."—Craig Finn, songwriter and guitarist, The Hold Steady

"Charming and heartfelt, hilarious and touching, Rushin's Sting-Ray Afternoons is a pitch-perfect portrait of growing up in middle America during the Brady Bunch era. A gem of a memoir, a tribute to family, and a delectable slice of American history."—Nina Sankovitch, author of Tolstoy and the Purple Chair and The Lowells of Massachusetts

"[Rushin's] childhood, from the ages of 3 to 13, was perfectly encapsulated in the 1970s, and he celebrates the excesses and excitement of the decade with ardor.... Rushin's everykid upbringing and the touchstones of childhood he recounts make Sting-Ray Afternoons a fun-filled and charming trip."—Booklist

"Rushin may not have been able to compete with his athletic older brothers for glory on the playing field, but he pleased his parents with a talent for puns and other wordplay... The nostalgic sweetness of his memories...provides convincing evidence that life in the '70s wasn't as chaotic as it's often made out to be."
—Kirkus Reviews

"Rushin uses his family as the book's focal point, capturing the nonstop zaniness of growing up with four siblings.... But it's Rushin's dad, a child of the Depression, who steals the show. Whether quoting his father as he describes his five kids...or retelling stories about him being drunk on what was the then new Boeing 747, it's through his father that Rushin captures the mystery and magic of childhood."
—Publishers Weekly

"In his funny, elegiac memoir Sting-Ray Afternoons, Rushin mines...ineffably familiar terrain with a sense of irony and deep affection, working hard to capture the look and feel of the 1970s...Much of what Rushin writes about - the Sears Christmas Wish Book, leaded gasoline, Johnny Carson's many vacations - will strike a chord with anyone who, like me, grew up in that era. What makes the book more than just late-baby-boomer nostalgia is the writing, which is knowing and funny."—Jim Zarroli, NPR

A "touching nostalgic memoir.... A vivid and comedic approach to [Rushin's] personal touchstones for the era."
—CBC Radio's "Day Six"

"Magnificent... You will not read a better book this summer - and maybe well into the fall and winter, too."
—New York Post

"Sting-Ray Afternoons is [Rushin's] story of growing up in Bloomington in the 1970s. It's a lighthearted, sentimental look back at a Minnesota childhood with a twist of wryness... Rushin's told-with-a-smile stories of childhood are worth the trip: bundling into a snowmobile suit in winter, piling into the Ford LTD Country Squire for a cross-country summer vacation, making mild mischief with neighborhood friends, and one memorable disaster when nature called and wouldn't be kept waiting. All seen through that gauzy, yellowish filter that blurs memory with Dad's Super 8 movies."
—Casey Common, Minneapolis Star Tribune

"A humorous and poignant account of growing up in the 1970s."
—Carole Goldberg, Hartford Courant

"Rushin's use of the English language not only paints a complete picture of what it was like to score a touchdown in a game of football in the front yard or get that strikeout in garage but connects those who grew up in a different time."
—Jason Olson, Sun Current

"A warm-yet-bittersweet fun-loving-yet-elegiac look at life.... A hell of a good spin in the wayback machine."
—Signature Reads

"Rushin's takes on artificially colored culture are laced equally with humor and affection, and he captures both the wonder and fear at the tipping point between childhood and adolescence. Sting-Ray Afternoons is the best kind of nostalgia: celebratory yet clear-eyed, wistful but not overly sentimental."—Amazon's Omnivoracious Blog

"He has an amazing way with words... Reading it made me nostalgic for a special time in my life."
—Eddie Gossage, President of Texas Motor Speedway on Dallas News' "Read Any Good Books Lately?"