The Worst of All Possible Worlds (The Salvagers #3) (Paperback) 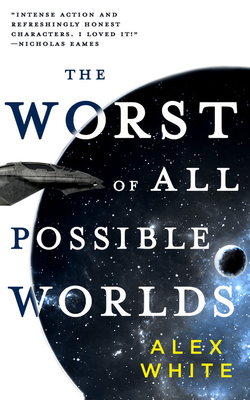 This is book number 3 in the The Salvagers series.

The rag-tag crew of the Capricious hunts down rogue AI, ancient colony ships, and the biggest treasure in the universe in this pulse-pounding space adventure for fans of Firefly and The Expanse.
The crew of the Capricious seems to leave a trail of devastation wherever they go. But with powerful enemies in pursuit and family and friends under attack planetside, there's no time to worry about all that. Ensnared by the legend of Origin, humanity's birthplace, and a long-dead form of magic, the Capricious takes off on a journey to find the first colony ship . . . and power that could bring down gods.
Read the incredible space-fantasy series that V. E. Schwab calls "A total blast!"
The Salvagers
A Big Ship at the Edge of the Universe
A Bad Deal for the Whole Galaxy
The Worst of All Possible Worlds

Alex White was born and raised in the American South. They take photos, write music, and spend hours on YouTube watching other people blacksmith. They value challenging and subversive writing, but they'll settle for a good time.
Alex lives in the shadow of Huntsville, Alabama's rockets with their spouse, son, two dogs and a cat named Grim. Favored pastimes include Legos and racecars. They take their whiskey neat and their espresso black.

"A clever fusion of magic and sci-fi makes this book a total blast. I was hooked from page one."V. E. Schwab, author of the Shades of Magic series on A Big Ship at the Edge of the Universe

"Fast, compelling, epic in scope, with stakes that just keep getting higher and tension that mounts and mounts to the breaking point. A Bad Deal for the Whole Galaxy is excellently paced, with engaging characters and worldbuilding that crams as much fun cool shit in as seems remotely possible. It's a deeply enjoyable ride. I recommend it and its predecessor heartily."Locus

"White combines elements of magic and traditional space opera to create an intricate world laced with fascinating characters, expansive spaceships, and compelling settings."Booklist on A Bad Deal for the Whole Galaxy

"[Fans of the TV show Firefly] will find a lot to love in this fast, funny, and wickedly smart series."B&N Sci-Fi & Fantasy Blog on A Bad Deal for the Whole Galaxy

"A Big Ship at the Edge of the Universe is perfectly paced, full of intense, inventive action and refreshingly honest characters. It's the seamless hybrid of fantasy and sci-fi that you didn't know you always needed. Do you miss Firefly? Do you want it back? Well, sorry, not gonna happen. But this book is damn close."Nicholas Eames, author of Kings of the Wyld

"White's assured debut is an entertaining throwback with some fun worldbuilding and two great lead characters."Publishers Weekly on A Big Ship at the Edge of the Universe

"To call this book fast-paced or action-packed is underselling it. Buckle up, readers: this is a ride you won't want to get off until the end."B&N Sci-fi & Fantasy Blog on A Big Ship at the Edge of the Universe

"[T]his ambitious start...combines magic and space opera to create a fast-paced adventure with charismatic characters and formidable enemies in a realized universe of greed and power."Booklist on A Big Ship at the Edge of the Universe

"Racing! Treasure and smuggling! A Big Ship at the Edge of the Universe is a gripping quest for justice among salvage and magic--I really loved it."
Mur Lafferty, author of Six Wakes

"A raucous genre-buster that careens through a series of hear-stopping curves and roars to a podium finish. Bratty, brilliant racer Nilah and hard-boiled cynic Boots are as winning a pair of strong female characters as I've met in years. A pacy plot, a diverse supporting cast, and a vivid set of worlds round out this highly entertaining series opener. Alex White is going to be leading the pack for years to come."
Claire Humphrey, author of Spells of Blood and Kin on A Big Ship at the Edge of the Universe

"A Big Ship at the Edge of the Universe starts in high gear and never lets up. Boasting action, intrigue and deadly fusions of technology and magic, you have to remember to put the book down now and then to take a breath!"
Mike Brooks, author of Dark Run

"An exciting, fast-paced, magic-fueled treasure hunt across the galaxy."
Corey J. White, author of the Voidwitch series on A Big Ship at the Edge of the Universe

"A crazy blend of SF and fantasy concepts, with exciting characters and a brilliant universe - highly recommend!"Jamie Sawyer, author of The Lazarus Wars series on A Big Ship at the Edge of the Universe