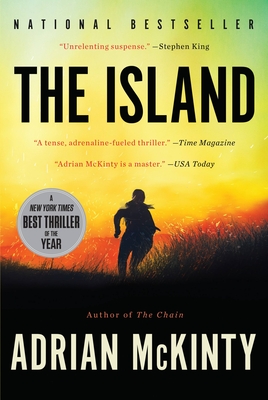 IT WAS JUST SUPPOSED TO BE A FAMILY VACATION.

A TERRIBLE ACCIDENT CHANGED EVERYTHING.

YOU DON'T KNOW WHAT YOU'RE CAPABLE OF UNTIL THEY COME FOR YOUR FAMILY.

"Unrelenting suspense. It reminded me a little of Jaws."—Stephen King

"One of this summer's best standalone thrillers."
—The Boston Globe

“The locals aren’t always friendly in vacation hot spots, but on the closed-to-the-public island Tom sneaks his family in to for fun, they’re out to kill. Maybe Disney World next time?”
—People

"What a shock it was to discover how deeply invested I became in the fate of the characters of The Island, a propulsive, insane story, about an all-out struggle for survival between an Australian family and a group of American interlopers. . . . Heather, who starts as a clueless young bride who expects her older husband to take care of her and has no love for his children, becomes not just a Charlize Theron-worthy badass but also a great stepmother who helps two damaged kids come into their own.”
—The New York Times Book Review

"The action is frenetic and relentless . . . entirely satisfying if you’re looking for a reliable nightmare or two.”—Toronto Star