A Door in the Earth (Paperback) 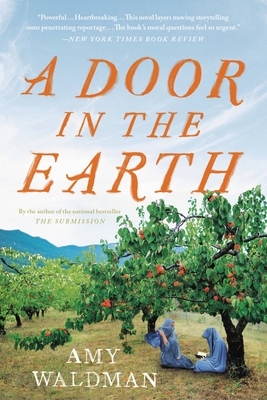 From the bestselling author of The Submission: A young Afghan-American woman is trapped between her ideals and the complicated truth in this "penetrating" (O, Oprah Magazine), "stealthily suspenseful," (Booklist, starred review), "breathtaking and achingly nuanced" (Kirkus, starred review) novel.

Parveen Shams, a college senior in search of a calling, feels pulled between her charismatic and mercurial anthropology professor and the comfortable but predictable Afghan-American community in her Northern California hometown. When she discovers a bestselling book called Mother Afghanistan, a memoir by humanitarian Gideon Crane that has become a bible for American engagement in the country, she is inspired. Galvanized by Crane's experience, Parveen travels to a remote village in the land of her birth to join the work of his charitable foundation.

When she arrives, however, Crane's maternity clinic, while grandly equipped, is mostly unstaffed. The villagers do not exhibit the gratitude she expected to receive. And Crane's memoir appears to be littered with mistakes, or outright fabrications. As the reasons for Parveen's pilgrimage crumble beneath her, the U.S. military, also drawn by Crane's book, turns up to pave the solde road to the village, bringing the war in their wake. When a fatal ambush occurs, Parveen must decide whether her loyalties lie with the villagers or the soldiers -- and she must determine her own relationship to the truth.

Amy Waldman, who reported from Afghanistan for the New York Times after 9/11, has created a taut, propulsive novel about power, perspective, and idealism, brushing aside the dust of America's longest-standing war to reveal the complicated truths beneath. A Door in the Earth is the rarest of books, one that helps us understand living history through poignant characters and unforgettable storytelling.

Amy Waldman's first novel, The Submission, won the Janet Heidinger Kafka Prize and an American Book Award and was named a Finalist for the PEN Hemingway Award. It was Entertainment Weekly's #1 Novel for the Year, Esquire's Book of the Year, a New York Times Best Book for 2011, one of NPR's Ten Best Novels of the Year, and a Washington Post Notable Fiction Book. In the UK, it was a Finalist for The Guardian First Book Award and was long-listed for the Orange Prize. Amy was South Asia Bureau Chief for the New York Times and a national correspondent for the Atlantic. She graduated from Yale University and has been a Fellow at the Radcliffe Institute for Advanced Study and at the American Academy in Berlin. She lives with her family in Brooklyn.

"A teeming
panoply...layers moving storytelling onto penetrating reportage...Waldman is particularly gifted at giving tangible reality to ethical
dilemmas...Few contemporary authors have shown so expertly that
well-intentioned intervention can be the most dangerous kind of all."—Lara Feigel, New York Times Book Review

"In her illuminating second novel, Waldman unpeels layers of cultural conditioning to explore the American use of 'kind power.'"—BBC

"Waldman writes about the clash of cultures and ideals with clean-lined
grace and quiet eye-level empathy."—Entertainment Weekly

"Waldman's characters are fully realized individuals, as morally complex as the choices facing them...Waldman is that rare novelist who writes from both the head and heart, combining high moral seriousness with moments of irony and humor. In A Door in the Earth, she has created a novel as moving as it is provocative."—Elizabeth Toohey, Christian Science Monitor

"Waldman delivers a breathtaking and achingly nuanced examination of the grays in a landscape where black and white answers have long been the only currency. A bone-chilling takedown of America's misguided use of soft power."—Kirkus Reviews (starred review)

"A deeply well-informed, utterly engrossing, mischievously disarming, and stealthily suspenseful tale...Every aspect of this complex and caustic tale of hype and harm is saturated with insight and ruefulness."—Donna Seaman, Booklist (starred review)

"A Door in the Earth is a deeply chilling, multifaceted examination of not just the situation in Afghanistan but also the more pernicious and complex consequences of awakening the sleeping giant that is America."—Stephenie Harrison, Bookpage (starred review)

"Waldman's moral vision, spare and unsparing prose style, and feel for the way history upsets settled lives all make A Door in the Earth one of the essential books of the post-9/11 era."—George Packer, National Book Award winner for The Unwinding

"Some stories stick with you, becoming like your own memories. When I finished the last page of this book I could've sworn it had all happened to me."—Elliot Ackerman, National Book Award finalist for Dark at the Crossing

"Potent...Waldman paints a blistering portrayal of the misguided aspirations and convenient lies that have fed the war in Afghanistan. This is an impressive novel.—Publishers Weekly