Eye of the Sh*t Storm (The Frost Files #3) (Paperback) 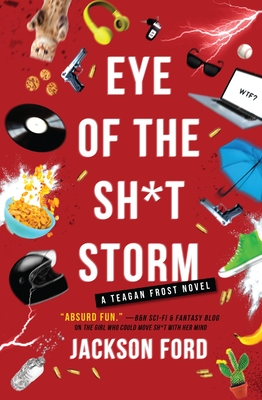 This is book number 3 in the The Frost Files series.

Full of imagination, wit, and random sh*t flying through the air, "Alias meets X-Men" in this insane new Frost Files adventure that will blow your tiny mind (Maria Lewis).
​

Teagan Frost might be getting better at moving sh*t with her mind - but her job working as a telekinetic government operative only ever seems to get harder. That's not even talking about her car-crash of a love life . . .

And things are about to get even tougher. No sooner has Teagan chased off one psychotic kid hell-bent on trashing the whole West Coast, but now she has to contend with another supernatural being who can harness devastating electrical power. And if Teagan can't stop him, the whole of Los Angeles will be facing the sh*tstorm of the century . . .

“An un-put-down-able, action-packed adventure that packs an emotional punch” (Kirkus).

For more from Jackson Ford, check out:
The Girl Who Could Move Sh*t With Her Mind
Random Sh*t Flying Through the Air
Eye of the Sh*t Storm

Jackson Ford is a pseudonym for Rob Boffard, a South African writer currently living in Vancouver. He is the author of the critically acclaimed Frost Files series, about a government operative with telekinetic powers. He has released four science fiction novels under the name Rob Boffard, and was previously a journalist for over a decade, writing articles for publications and sites including the Guardian, the BBC, Wired Magazine, and io9.

"Fans who’ve been along for the ride on Teagan’s previous two outings know what to expect by now, and this third installment fully delivers, with a breakneck pace, high stakes, and plenty of wisecracks. The result is gripping, suspenseful, and thoroughly enjoyable . . . An un-put-down-able, action-packed adventure that packs an emotional punch."—Kirkus

"A non-stop adrenaline high. Fans of the series will be eagerly awaiting the further adventures of Teagan and her cohorts, and newcomers will quickly fall in love with Jackson’s quirky cast of characters, imaginative storytelling, and wry wit."—Library Journal

"Furious, frenetic, fun, and "f**k you": All equally valid descriptions of this book and its punk rock chef/psychic warrior protagonist. It's like the X-Men, if everybody was sick of each other's sh*t, they had to work manual labor to pay rent, and Professor X was a sociopathic government stooge. A drunken back-alley brawler of a book."—Robert Brockway, author of The Unnoticeables, on The Girl Who Could Move Sh*t With Her Mind

"Like Alias meets X-Men. I loved it."—Maria Lewis, on The Girl Who Could Move Sh*t With Her Mind

"Ford's debut holds nothing back, delivering a sense of absurd fun and high-speed thrills that more than lives up to that amazing title."—B&N Sci-Fi & Fantasy Blog, on The Girl Who Could Move Sh*t With Her Mind

"Teagan is a frank and funny narrator for this wild ride, which starts off with our heroine falling from the 82nd floor of a skyscraper and pretty much never slow down . . . . A fast-paced, high-adrenaline tale that manages to get into some dark themes without losing its sense of fun."—Kirkus, on The Girl Who Could Move Sh*t With Her Mind

"Ford's breakneck pace keeps the tension high, and the thrills coming the whole way through."—BookPage, on The Girl Who Could Move Sh*t With Her Mind

"The novel unfolds cinematically with loads of breathtaking action, a perfect candidate for film or television adaptation . . . [Readers will] want more."—Booklist, on The Girl Who Could Move Sh*t With Her Mind

"Ford's strengths are evident in the taut acton sequences and suspenseful pacing."—Publishers Weekly, on The Girl Who Could Move Sh*t With Her Mind

"The writing and storytelling is as clear and fun as the title indicates."—Locus, on The Girl Who Could Move Sh*t With Her Mind