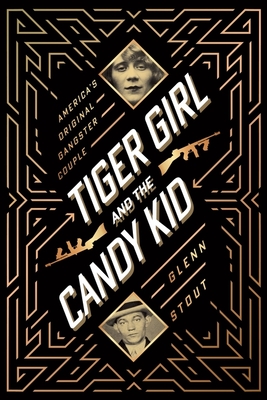 Before Bonnie and Clyde there were Tiger Girl and the Candy Kid. In the wake of world war, a pandemic, and an economic depression, Margaret and Richard Whittemore, two love-struck working-class kids from Baltimore, reached for the dream of a better life. The couple headed up a gang that in less than a year stole over one million dollars’ worth of diamonds and precious gems—over ten million dollars today.

Margaret was a chic flapper, the archetypal gun moll, partner to her husband’s crimes. Richard was the quintessential bad boy, whose cunning and violent ambition allowed the Whittemores to live the kind of lives they'd only seen in the movies. Along the way he killed at least three men, until prosecutors managed a conviction. As tabloids across the country exclaimed the details of the couple’s star-crossed romance, they became heroes to a new generation of young Americans who sought their own version of freedom.

Set against the backdrop of the Roaring Twenties’ excesses, acclaimed author Glenn Stout takes us from the jailhouse to the speakeasy, from the cabarets where the couple celebrated good times to the gallows where their story finally came to an end—leaving Tiger Girl pining for a final kiss. Tiger Girl and the Candy Kid is a thrilling tale of rags to riches, tragedy and infamy.

GLENN STOUT is a freelance writer, author, and editorial consultant and has served as series editor of The Best American Sports Writing since its inception. He is the author of Young Woman and the Sea and Fenway 1912, and has collaborated with Richard Johnson on Red Sox Century,Yankees Century,The Cubs, and The Dodgers. Stout has lived in and around Boston for 20 years, and currently lives in Vermont.

"Reported with a historian's careful research and written with a novelist's mastery of character and scene, Tiger Girl and the Candy Kid is a true-crime thriller embedded with a love story, set in the intoxicating glamour of the Roaring Twenties. A fast-paced, exhilarating read, the story unfolds like cinematic noir. This book deserves a place on the shelf next to Devil in the White City as a gem of true-crime narrative nonfiction."—Kim Cross, New York Times best-selling author of What Stands in a Storm   "Straight out of Ben Hecht by way of Damon Runyon, Tiger Girl and the Candy Kid are the Adam and Eve of jazz-mad flappers and mad-dog killers. Avid and dynamic, this is Glenn Stout at his storytelling best, delivering a meticulous history with a kick like bathtub gin: Of a man and a woman fallen at the founding of modern America - that revved-up white-hot electric-chair America of sensational tabloid crime and smash-and-grab capitalism, of sudden money and sex and excess, reckless ambition and lies and violence, all of it spinning a blur - and woven now into the perfect book for our own roaring moment." —Jeff MacGregor, Smithsonian Magazine   “Compared to Tiger Girl and the Candy Kid, Bonnie and Clyde were pikers. The original gangster couple was more ruthless, more captivating, and far more clever, the inspiration for the gangster movies made in their wake. As you read Stout’s deeply researched, fast-moving account – covering a multi-year crime spree, courtroom dramas, and an unexpected denouement -- you’ll keep asking yourself: why hadn’t I heard of them before? If Tiger Girl and Candy Kid doesn’t become a blockbuster movie, Hollywood is broken.”—John U. Bacon, bestselling author of The Great Halifax Explosion   "It’s strange what we forget. Margaret and Richard Whittemore were Jazz Age icons, their gang’s jewel heists and bank robberies the stuff of bandit legend. Chased down by detectives and time, their love-and-crime story was lost to all but the Underworld—until Glenn Stout brought their exploits back to vivid life in this shining, meticulous book. In a way, Stout’s fine-eyed attention is one last score for Tiger Girl and the Candy Kid. Nobody knew better the value of a professional."—Chris Jones, author of Out of Orbit   "Tiger Girl and the Candy Kid brings the Roaring Twenties to life. With his meticulous research and vivid writing, Glenn Stout captures the era’s perverse version of the American Dream, in all of its excesses and envy. Stout imbues century-old jewelry robberies with heart-stopping suspense. Beyond that, he shows how his protagonists birthed the archetypes of the bad boy gangster and the gun moll, and how the breathless coverage of their crimes created the true crime genre."—Greg Hanlon, People   "This is a get-away car of a book -- you dive in and hold on tight and trust the driver as the tires burn, the police sirens wail in the distance, and all that 1920s Americana rushes by outside."—Ben Montgomery, author of Grandma Gatewood's Walk and A Shot in the Moonlight   "[A] rollicking true crime tale...This snappy page-turner informs and delights."—Publishers Weekly   "Stout brings the Whittemores and their era to vivid life in this engrossing biography...The Whittemores finally take their place in the pantheon of early-twentieth-century criminals."—Booklist   "In Tiger Girl and the Candy Kid Glenn Stout has uncovered one of the la