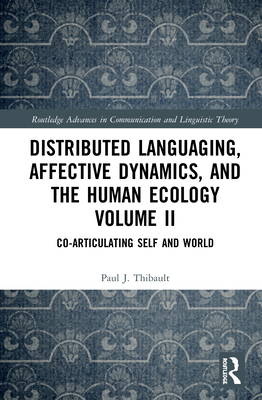 By Paul J. Thibault
Email or call for price.

Language plays a central role in human life. However, the term "language" as defined in the language sciences of the 20th century and the traditions these have drawn on, have arguably limited our thinking about what language is and does. The two inter-linked volumes of Thibault's study articulate crucially important aspects of an emerging new perspective shift on language-the Distributed Language view-that is now receiving more and more attention internationally. Rejecting the classical view that the fundamental architecture of language can be localised as a number of inter-related levels of formal linguistic organisation that function as the coded inputs and outputs to each other, the distributed language view argues that languaging behaviour is a bio-cultural organiation of process that is embodied, multimodal, and integrated across multiple space-time scales.

Thibault argues that we need to think of human languaging as the distinctively human mode of our becoming and being selves in the extended human ecology and the kinds of experiencing that this makes possible. Paradoxically, this also means thinking about language in non-linguistic ways that break the grip of the conventional meta-languages for thinking about human languaging. Thibault's book grounds languaging in process theory: languaging and the forms of experience it actualises is always an event, not a thing that we "use". In taking a distinctively interdisciplinary approach, the book relates dialogical theories of human sense-making to the distributed view of human cognition, to recent thinking about distributed language, to ecological psychology, and to languaging as inter-individual affective dynamics grounded in the subjective lives of selves. In taking this approach, the book considers the coordination of selves in social encounters, the emergent forms of self-reflexivity that characterise these encounters, and the implications for how we think of and live our human sociality, not as something that is mediated by over-arching codes and systems, but as emerging from the endogenous subjectivities of selves when they seek to coordinate with other selves and with the situations, artefacts, social institutions, and technologies that populate the extended human ecology.

Paul J. Thibault, who grew up in Newcastle, Australia, and completed his PhD under Michael Halliday's supervision at the University of Sydney in 1984, is Professor in Linguistics and Communication Studies at the University of Agder, Kristiansand, Norway. He was Hans Christian Andersen Academy Visiting Professor at the University of Southern Denmark, Odense (2015-2018). He has held academic posts in Australia, China, Italy, and Hong Kong. His research interests and publications are in the areas of applied and general linguistics, development, distributed language and cognition, graphics and interactivity, human-animal interaction, human interactivity, learning, multimodality, narrative, social theory, learning theory and teaching and learning in higher education, philosophy of language, philosophy of mind, and systemic-functional linguistics. He is also currently working on two new books entitled The Linguistic Imagination and Language, Body, World: A critical rereading of Hjelmslev. He is currently on the editorial boards of six international journals. With Mark King, he is developing theoretical frameworks and methodological tools for the study of human learning in tertiary settings using the perspectives of distributed cognition, eye tracking, interactivity, and Multimodal Event Analysis. With Anthony Baldry, he is developing the idea of multimodal ecological literacy. He has had a deep interest in ecological questions since he was seven years old. He believes that the predominantly mechanistic theories of human cognition and semiosis need to be replaced by a new account of what it means to be a living, feeling human self in the human ecology.