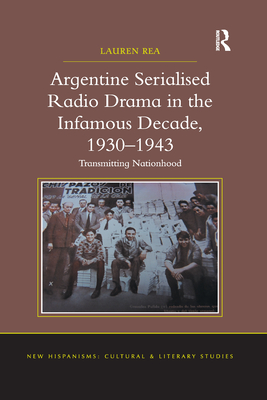 By Lauren Rea
Email or call for price.
Special Order

In her study of key radio dramas broadcast from 1930 to 1943, Lauren Rea analyses the work of leading exponents of the genre against the wider backdrop of nation-building, intellectual movements and popular culture in Argentina. During the period that has come to be known as the infamous decade, radio serials drew on the Argentine literary canon, with writers such as H ctor Pedro Blomberg and Jos Andr's Gonz lez Pulido contributing to the nation-building project as they reinterpreted nineteenth-century Argentina and repackaged it for a 1930s mass audience. Thus, a historical romance set in the tumultuous dictatorship of Juan Manuel de Rosas reveals the conflict between the message transmitted to a mass audience through popular radio drama and the work of historical revisionist intellectuals writing in the 1930s. Transmitted at the same time, Gonz lez Pulido's gauchesque series evokes powerful notions of Argentine national identity as it explores the relationship of the gaucho with Argentina's immigrant population and advocates for the ideal contribution of women and the immigrant population to Argentine nationhood. Rea grounds her study in archival work undertaken at the library of Argentores in Buenos Aires, which holds the only surviving collection of scripts of radio serials from the period. Rea's book recovers the contribution that these products of popular culture made to the nation-building project as they helped to shape and promote the understanding of Argentine history and cultural identity that is widely held today.

Lauren Rea is Lecturer in Hispanic Studies at the University of Sheffield.