A Galaxy of Sea Stars (Hardcover) 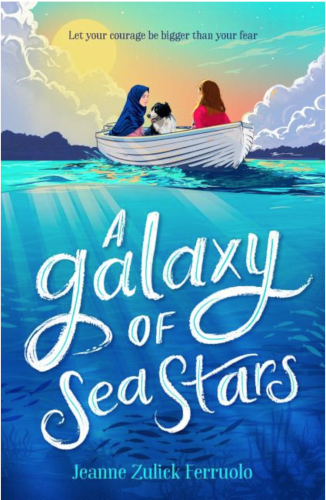 Wow! Such thoughtful writing. Every lovely, powerful, perfect word just falls into place to tell a tale of bravery. Of staying true to yourself. Of speaking out. And such careful consideration was given to each character. I stood in Izzy’s shoes and Sitara’s and not only felt what they felt but really understood their points of view—their stories. I also love what Nonni said to Izzy: Will your fear be bigger than your courage, or will your courage be bigger than your fear?

Jeanne Zulick Ferruolo is the author of A Galaxy of Sea Stars and Ruby in the Sky, which earned two starred reviews and which Booklist called “quietly magical.” She is also a volunteer with IRIS-Integrated Refugee & Immigrant Services in New Haven, Connecticut. She lives in Ellington, Connecticut, with her family.

Ruby in the Sky:

“Ferruolo’s debut has a quietly magical feel, aided by passages describing Ruby’s fascination with the moon. The faraway moon serves as a poignant theme throughout the book and connects satisfyingly to Abigail’s backstory. The story also skillfully depicts everyday injustices and how those in power control the narrative unless ordinary people stand up against them.” —Booklist, starred review