I Live a Life Like Yours: A Memoir (Paperback) 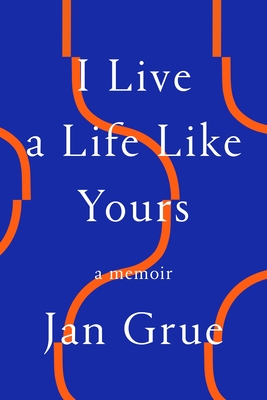 "A quietly brilliant book that warms slowly in the hands." —Dwight Garner, The New York Times

Jan Grue was diagnosed with spinal muscular atrophy at the age of three. Shifting between specific periods of his life—his youth with his parents and sister in Norway; his years of study in Berkeley, St. Petersburg, and Amsterdam; and his current life as a professor, husband, and father—he intersperses these histories with elegant, astonishingly wise reflections on the world, social structures, disability, loss, relationships, and the body: in short, on what it means to be human. Along the way, Grue moves effortlessly between his own story and those of others, incorporating reflections on philosophy, film, art, and the work of writers from Joan Didion to Michael Foucault. He revives the cold, clinical language of his childhood, drawing from a stack of medical records that first forced the boy who thought of himself as “just Jan” to perceive that his body, and therefore his self, was defined by its defects.

I Live a Life Like Yours is a love story. It is rich with loss, sorrow, and joy, and with the details of one life: a girlfriend pushing Grue through the airport and forgetting him next to the baggage claim; schoolmates forming a chain behind his wheelchair on the ice one winter day; his parents writing desperate letters in search of proper treatment for their son; his own young son climbing into his lap as he sits in his wheelchair, only to leap down and run away too quickly to catch. It is a story about accepting one’s own body and limitations, and learning to love life as it is while remaining open to hope and discovery.

Jan Grue is the author of a wide-ranging body of work in fiction, nonfiction, children’s books, and academic literature, and a professor at the University of Oslo. I Live a Life Like Yours was published in 2018 in Norway, where it won the Norwegian Critics Prize for Literature and was nominated to the Nordic Council Literature Prize, the first Norwegian nonfiction book to be so honored in fifty years.

B. L. Crook is a writer and literary translator. In 2010, she founded SAND, an English literary journal, in Berlin. She led creative writing workshops in the Netherlands for two years before returning to the United States. She lives with her family on an island near Seattle.

B. L. Crook is a writer and literary translator. In 2010, she founded SAND, an English literary journal, in Berlin. She led creative writing workshops in the Netherlands for two years before returning to the United States. She lives with her family on an island near Seattle.

"This is uniquely Jan Grue’s story, one in which he endeavors to fit his extraordinary shape into an ordinary world. It is a narrative that is compelling, unconventional and powerfully told . . . From behind the veil of disability, he shares valuable insight about the human condition. Do pay attention to that man behind the curtain. He has a lot to say." —Michael J. Fox, The New York Times Book Review (Editors' Choice)

"A quietly brilliant book that warms slowly in the hands." —Dwight Garner, The New York Times

“[Grue's] book—which doubles as a work of literary criticism and cultural history—is, yes, an elegant meditation on what it’s like to be a body that does not resemble most other bodies, but it’s also about aging, parenthood, memory, academia, and love. A tart and spare palate cleanser.” —Molly Young, Vulture

"Powerful . . . Elicits compassionate understanding . . . A deep meditation on the nature of memory and the body versus the self." —Rebecca Foster, Shelf Awareness

"An exquisitely written memoir of a life lived with disability . . . A truly profound work of rare finesse." —Anne Cunningham, The Independent (UK)

"Grue elegantly flows between memoir, essay, and intellectual discourse in this magnificent story about living with a disability . . He brilliantly articulates what it’s like to be 'erased and rewritten,' and, more poignantly, what it’s like to obliterate the narrative one’s been handed. This stunning work isn’t to be missed." —Publishers Weekly (starred review)

“A sensitive examination of the meaning of disability . . . Frank and often moving . . . Absorbing, insightful reflections on being human.” —Kirkus (starred review)

"This artful, poetic memoir thoughtfully explores life with disability . . . An honest look at the complexities of being human no matter how one’s body functions. Grue’s reflections on life will spark the interest of all readers of literary nonfiction." —Library Journal

"Lyrical . . . A gentle recollection of a life in which disability appears to be no match for tenacity." —Tony Miksanek, Booklist

"Jan Grue’s I Live a Life like Yours is the story of a journey from a childhood lived under a medical diagnosis that predicted a life diminished by disability to an adulthood replete with fulfilling work, family, and life that undoes the expectations the world presses upon those of us who live with disabilities. Along the way, Grue moves from the confines of what the doctors and teachers expect from a boy whose diagnosis is a story of an uncertain future, to the truly open future that Grue finds in books, art, love, and the eager surge toward life. The story of a life lived well with disabilities is a surprise to almost everyone who thinks of themselves as free from the limitations many of us assume disability inevitably brings. All of us, whether we consider ourselves disabled or nondisabled, will understand more fully what it means to be human if we accompany Jan Grue in his rich travels from his story of limitation to his story of fulfillment." —Rosemarie Garland-Thomson, Professor Emerita of English and bioethics at Emory University and co-editor of About Us: Essays from the New York Times about Disability by People with Disabilities

"In this nuanced and beautiful book, Jan Grue takes us on both an experiential and intellectual journey through disability. In the process he offers us doorways into reimagining a world where disability is welcomed and vulnerability supported. I Live a Life Like Yours is one of those rare books you won't be able to put down, yet will want to return to again and again to random pages for the insights and reflections they offer. A gift to read, and a fabulous addition to the long tradition of disabled people transforming the world through autobiography." —Sunaura Taylor, artist and author of Beasts of Burden: Animal and Disability Liberation

"Grue is not in the defensive position of justifying his existence as a disabled body but instead he is engaged in a rich investigation of the (medical, intellectual and emotional) language of his past and how it has shaped his sense of self. This is a voice that has found inventive ways to imagine and frame disability and difference." —Raymond Antrobus, author of the Rathbones Folio Prize-Winning The Perseverance

"A remarkable reflection on disability and difference—parenthood, the body, and the self. Essential reading for anyone troubled by the question of whether or not they'll ever be able to feel like a human being." —Tom Whyman, author of Infinitely Full of Hope

"I Live a Life Like Yours is quietly but insistently radical, a book which demands space and leaves change behind. As both an attempt to elucidate the specific details of a life seen from inside, and an examination of the limits of such an attempt, it is both beautiful and captivating." —Jessie Greengrass, author of Sight and The High House