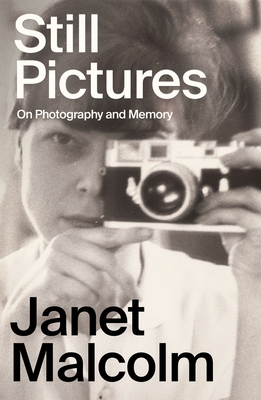 For decades, Janet Malcolm’s books and dispatches for The New Yorker and The New York Review of Books poked and prodded at reportorial and biographical convention, gesturing toward the artifice that underpins both public and private selves. In Still Pictures, she turns her gimlet eye on her own life—a task demanding a writer just as peerlessly skillful as she was widely known to be.

Still Pictures, then, is not the story of a life but an event on its own terms, an encounter with identity and family photographs as poignant and original as anything since Roland Barthes’s Camera Lucida. Malcolm looks beyond the content of the image and the easy seductions of self-recognition, constructing a memoir from memories that pose questions of their own.

Still Pictures begins with the image of a morose young girl on a train, leaving Prague for New York at the age of five in 1939. From her fitful early loves, to evenings at the old Metropolitan Opera House, to her fascination with what it might mean to be a “bad girl,” Malcolm assembles a composite portrait of a New York childhood, one that never escapes the tug of Europe and the mysteries of fate and family. Later, Still Pictures delves into her marriage to Gardner Botsford, the world of William Shawn’s New Yorker, and the libel trial that led Malcolm to become a character in her own drama.

Displaying the sharp wit and astute commentary that are Malcolmian trademarks, this brief volume develops into a memoir like few others in our literature.

Janet Malcolm (1934–2021) was the author of many books, including In the Freud Archives; The Journalist and the Murderer; Two Lives: Alice and Gertrude, which won the 2008 PEN/Jacqueline Bograd Weld Award for Biography; and Forty-One False Starts, which was a finalist for the 2013 National Book Critics Circle Award for Criticism. She was a frequent contributor to The New Yorker and The New York Review of Books. In 2017, Malcolm received the Gold Medal for Belles Lettres and Criticism from the American Academy of Arts and Letters.

Ian Frazier is the author of Travels in Siberia, Great Plains, On the Rez, Lamentations of the Father and Coyote V. Acme, among other works, all published by Farrar, Straus and Giroux. He graduated from Harvard University. A frequent contributor to The New Yorker, he lives in Montclair, New Jersey.

“Superb . . . While [Malcolm's] writing in these passages remains restrained, as it always was, they bear an unwonted intensity of feeling, seemingly held just barely at bay . . . [Still Pictures] unavoidably calls to mind the enduring power of another émigré, the novelist W.G. Sebald, who made similar use of photographs . . . [The] final, splendid, most personal work of her long career.” —Charles Finch, The New York Times Book Review

“[Still Pictures] may be the world’s most elegant annotated photo album . . . Each sentence, in true Malcolm form, turns out masterful . . . The collage artist puts fragments next to each other to make meaning, or spark energy, and this is what Malcolm does in Still Pictures . . . She is writing about the difficulty we have evoking our former selves, the many ways in which they are strangers to us.” —Katie Roiphe, The Atlantic

"[Still Pictures] is a characteristically Malcolmian work, reflecting on and resisting the conventions of the form in which she writes . . . It is as though we are sitting next to her in her living room as she flips through a family album . . . Part of the pleasure of this memoir is simply in getting to know her a little bit more . . . The other part is in reading new sentences by Janet Malcolm. They land like the opening lines of classic novels—hard, shining, immovable truths." —Elizabeth Winkler, The Wall Street Journal

"[An] evocative and distinctive final book—an unusually succinct and thought-provoking personal memoir that manages to capture so much of what made Janet Malcolm so unfailingly interesting." —Heller McAlpin, NPR

"Malcolm was one of our greatest writers, which makes the lesson of Still Pictures only the more poignant. Her final volume proves that even the finest chroniclers can still be leveled by their own lives, and that the memories that make us human are the foggiest and most ephemeral." —Jessica Ferri, Los Angeles Times

“[Malcolm’s] crisply argued, surprising, and mind-altering books are electrifying. This posthumous, delectably personal volume is a gift to all who have been happily provoked by her cutting observations, refusal to play nice, and mordant wit and a boon for every reader in search of superbly precise memoiristic essays.” —Donna Seaman, Booklist

"[An] evocative posthumous memoir . . . Witty (“I was infected early on with the virus of romance”) and reflective (“The glitter of memory may be no less deceptive”), this is a monument to a master of her craft." —Publishers Weekly