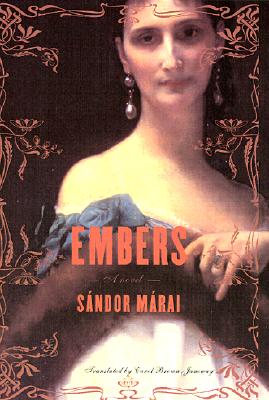 The rediscovery of a masterpiece of Central European literature originally published in Budapest in 1942 and un-
known to modern readers until last year. An extraordinary novel about a triangular relationship, about love, friendship, and fidelity, about betrayal, pride, and true nobility.

In a castle at the foot of the Carpathian Mountains, an old aristocrat waits to greet the friend he has not seen for forty-one years. In the course of this one night, from dinner until dawn, the two men will fight a duel of words and silences, of stories, of accusations and evasions, that will encompass their entire lives and that of a third person, missing from the candlelit dining hall—the now dead chatelaine of the castle. The last time the three of them sat together was in this room, after a stag hunt in the forest. The year was 1900. No game was shot that day, but the reverberations were cataclysmic. And the time of reckoning has finally arrived.

Already a great international best-seller, Embers is a magnificent addition to world literature in the English language.

"Thanks to this first English translation of Embers, our ever-shrinking world of culture seems a little bigger....The reviewer must be discreet because any description of the novel's central event will destroy the spell that every reader is entitled to in reading [it]. Let it be said that in every way the novel is satisfying. There are no loose ends, no cheap avoidances, no dangling possibilites for a sequel.... the statues in the famous metaphorical garden of T.S. Eliot's literary tradition will have to be rearranged to make room for this powerful work."
-Tom McGonigle, Los Angeles Times


"The first English translation of a brooding, densely atmospheric, forgotten 1942 novel whose eminent Hungarian expatriate author (b. 1900) committed suicide, while living in the US, in his 89th year. . . . Mesmerizing. . . . A major rediscovery, arguably comparable to those of Bruno Schulz, Leo Perutz, and Joseph Roth. A small, beautifully fashioned masterpiece."
--Kirkus Reviews (starred review)

"With the triumph of a two hundred page novel, twentieth-century literature--which we thought was finally dead and buried--has received the posthumous gift of a new master whom in the future we will rank with Joseph Roth, Stefan Zweig, Robert Musil and even our other lost demigods, Thomas Mann and Franz Kafka. His name is Sándor Márai."
-Die Zeit

"Márai is in the almost unique position of having attained posthumous best-sellerdom (in country after country) because he distills plot and description to a magic essence of atmosphere, empathy and narrative tension that no European writer has achieved since Joseph Roth."
-Berthier Zeitung

"A novel that pares all superfluous detail away from plot and character to achieve maximum tension. Hemingway goes Habsburg!"
-Stadtzeitung Wien

"A literary master lays bare the essentials---what is truth, what are the questions we ask, what is the meaning of life itself---and lets them explode into action. His philosophy is profound but hardly leaves a footprint and is virtuoso in its clear-sighted precision. This novel is a literary rediscovery of the first rank."
-Hamburger Abendblatt

"This major European novelist not only anatomizes--brilliantly--one triangular relationship from the old Austro-Hungarian Empire, he also captures the pandemonium of all human relationships: the smoldering embers of our feelings, of lust, love, revenge and hate. It is wonderful, and a masterpiece."
- Der Spiegel