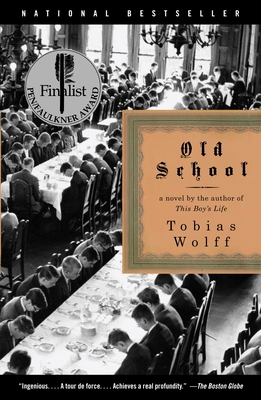 The protagonist of Tobias Wolff’s shrewdly—and at times devastatingly—observed first novel is a boy at an elite prep school in 1960. He is an outsider who has learned to mimic the negligent manner of his more privileged classmates. Like many of them, he wants more than anything on earth to become a writer. But to do that he must first learn to tell the truth about himself.

The agency of revelation is the school literary contest, whose winner will be awarded an audience with the most legendary writer of his time. As the fever of competition infects the boy and his classmates, fraying alliances, exposing weaknesses, Old School explores the ensuing deceptions and betrayals with an unblinking eye and a bottomless store of empathy. The result is further evidence that Wolff is an authentic American master.

Tobias Wolff lives in Northern California and teaches at Stanford University. He has received the Rea Award for excellence in the short story, the Los Angeles Times Book Prize, and the PEN/Faulkner Award.

"A sharply drawn, acutely felt novel of moral inquiry. . . . Wolff has put his readers in the landscape tracked across by writers as different as J. M. Coetzee, Philip Roth, and, going back, Conrad and Hawthorne." —The Washington Post Book World

"The kind of deceptively quiet novel that deserves a second, slow reading. An homage to the power of story to move, to awaken and even to transform." —The Plain Dealer