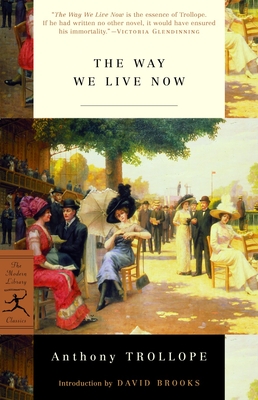 
'Trollope did not write for posterity,' observed Henry James. 'He wrote for the day, the moment; but these are just the writers whom posterity is apt to put into its pocket.' Considered by contemporary critics to be Trollope's greatest novel, The Way We Live Now is a satire of the literary world of London in the 1870s and a bold indictment of the new power of speculative finance in English life. 'I was instigated by what I conceived to be the commercial profligacy of the age,' Trollope said.

His story concerns Augustus Melmotte, a French swindler and scoundrel, and his daughter, to whom Felix Carbury, adored son of the authoress Lady Carbury, is induced to propose marriage for the sake of securing a fortune. Trollope knew well the difficulties of dealing with editors, publishers, reviewers, and the public; his portrait of Lady Carbury, impetuous, unprincipled, and unswervingly devoted to her own self-promotion, is one of his finest satirical achievements.

His picture of late-nineteenth-century England is a portrait of a society on the verge of moral bankruptcy. In The Way We Live Now Trollope combines his talents as a portraitist and his skills as a storyteller to give us life as it was lived more than a hundred years ago.


ANTHONY TROLLOPE, the quintessential Victorian novelist whose dozens of books illuminate virtually every aspect of late nineteenth century England, was born in Russell Square, London, on April 24, 1815. He was the son of Thomas Anthony Trollope, a failed barrister. His mother, Frances Trollope, successfully turned to writing in order to improve their finances.

As a charity day student at Harrow School Trollope was shunned by boarders. Later as a student at Winchester College he was often flogged his older brother Tom. At the age of nineteen Trollope embarked on a career as a civil servant in London's General Post Office. In 1841 he was transferred to Ireland, where he lived happily for the next eighteen years, advancing steadily through the ranks of the postal service. In 1844 he married Rose Heseltine, who became a trusted literary assistant once he began to write.

The Macdermots of Ballycloran, Trollope's first book, was published in 1847. But it was not until 1855 that he achieved commercial success with The Warden, the initial volume in six-book series about clerical life in and around the fictional cathedral town of Barchester. Two sequels, Barchester Towers (1857) and Doctor Thorne (1858), quickly ensured his fame. The West Indies and the Spanish Main, the first of several travelogues Trollope recorded while journeying abroad on postal business, appeared in October 1859. The same year he returned to England and took up residence at Waltham House in Hertfordshire, some twelve miles from London. There Trollope settled into a disciplined routine that enabled his phenomenal productivity. He rose every morning at five o'clock and wrote for three to four hours in order to meet a self-imposed weekly quota of approximately forty pages; moreover he frequently began a new book the very day he completed one. The novelist's only passionate diversion was foxhunting.

Trollope quickly became part of London's literary life. His work began to appear serially in Cornhill Magazine, and he formed a great friendship with its editor, William Thackeray. He finished the last three volumes in the Barsetshire series--Framley Parsonage (1861), The Small House at Allington (1864), and The Last Chronicle of Barset (1867). Meanwhile, he launched the Palliser novels, a new series about politics, with Can You Forgive Her? (1865). At the time, Nathaniel Hawthorne perfectly pinpointed the secret of the Englishman--s appeal: 'The novels of Anthony Trollope [are] just as real as if some giant had hewn a great lump out of the earth and put it under a glass case, with all its inhabitants going about their daily business, and not suspecting that they were being made a show of. These books are just as English as a beef-steak . . . but still I should think that human nature would give them success anywhere.'

Trollope resigned from the postal service late in 1867, to become editor of Saint Paul's Magazine. The next year he made an unsuccessful bid for a seat in Parliament. In 1871 Trollope relinquished Waltham House and embarked on a two-year trip to Australia, New Zealand, and the United States. Upon returning to London he settled at 39 Montagu Square and soon published the engaging travel book Australia and New Zealand (1873). In later novels Trollope shifted his interest from scenes of provincial life to satires of English politics and society--among them The Claverings (1867), He Knew He Was Right (1869), The Way We Live Now (1875), and The American Senator (1877). The five remaining Palliser novels--Phineas Finn (1869), The Eustace Diamonds (1873), Phineas Redux (1874), The Prime Minister (1876), and The Duke's Children (1880)--also focused on political and social themes.

In the final years of his life Trollope traveled extensively. He journeyed to Ceylon and South Africa, and revisited both Ireland and Australia. He also turned out two biographies, Thackeray (1879) and The Life of Cicero (1880), and began writing his memoirs. Anthony Trollope died on December 6, 1882, a month after suffering a paralyzing stroke. The author's self-portrait, An Autobiography, appeared the following year. 'Trollope will remain one of the most trustworthy . . . of the writers who have helped the heart of man to know itself,' judged Henry James. 'His great, his inestimable merit was a complete appreciation of the usual.'

"The Way We Live Now is the essence of Trollope. If he had written no other novel, it would have ensured his immortality."