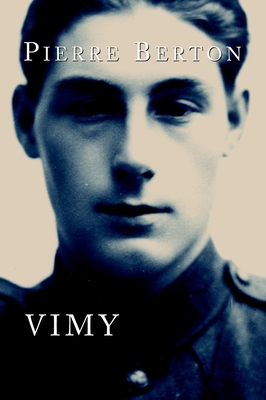 One chill Easter dawn in 1917, a blizzard blowing in their faces, the four divisions of the Canadian Corps in France went over the top of a muddy scarp knows as Vimy Ridge. Within hours, they held in their grasp what had eluded both British and French armies in over two years of fighting: they had seized the best-defended German bastion on the Western Front.

How could an army of civilians from a nation with no military tradition secure the first enduring victory in thirty-two months of warfare with only 10,000 casualties, when the French had lost 150,000 men in their unsuccessful attempt? Pierre Berton's haunting and lucid narrative shows how, unfettered by military rules, civilians used daring and common sense to overcome obstacles that had eluded the professionals.

Drawing on unpublished personal accounts and interviews, Berton brings home what it was like for the young men, some no more than sixteen years old, who clawed their way up the sodden, shell-torn slopes in a struggle they innocently believed would make war obsolete. He tells of the soldiers who endured horrific conditions to secure this great victory, painting a vivid picture of trench warfare. In his account of this great battle, Pierre Berton brilliantly illuminated the moment of tragedy and greatness that marked Canada's emergence as a nation.

PIERRE BERTON was one of Canada’s most popular and prolific authors. From narrative histories and popular culture, to picture and coffee table books to anthologies, to stories for children to readable, historical works for youth, many of his fifty books are now Canadian classics.

Born in 1920 and raised in the Yukon, Pierre Berton worked in Klondike mining camps during his university years. He spent four years in the army, rising from private to captain/instructor at the Royal Military College in Kingston. He spent his early newspaper career in Vancouver, where at 21 he was the youngest city editor on any Canadian daily. He wrote columns for and was editor of Maclean’s magazine, appeared on CBC’s public affairs program “Close-Up” and was a permanent fixture on “Front Page Challenge” for 39 years. He was a columnist and editor for the Toronto Star and was a writer and host of a series of CBC programs.

Pierre Berton received over 30 literary awards including the Governor-General’s Award for Creative Non-Fiction (three times), the Stephen Leacock Medal of Humour, and the Gabrielle Leger National Heritage Award. He received two Nellies for his work in broadcasting, two National Newspaper awards, and the National History Society’ s first award for “distinguished achievement in popularizing Canadian history.” For his immense contribution to Canadian literature and history, he was awarded more than a dozen honourary degrees, is a member of the Newsman’s Hall of Fame, and is a Companion of the Order of Canada.

Pierre Berton passed away in Toronto on November 30, 2004.

"Among the most important and vital accounts of war that we have…it is inexcusable not to read it."
—Timothy Findley

"…Vimy is Berton at his best and that's the best there is."
—Peter C. Newman