Into the Blizzard: Walking the Fields of the Newfoundland Dead (Hardcover) 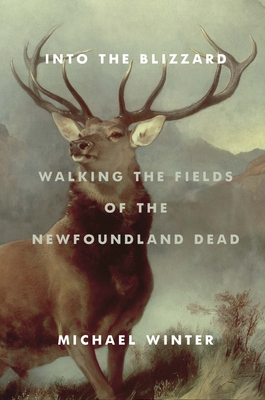 “In June a few years ago I set out to visit some of the World War One battlefields of Europe – the slope and valley and river and plain that the Newfoundland Regiment trained on, and fought over and through and under.”

So begins Michael Winter’s extraordinary narrative that follows two parallel journeys, one laid on top of the other like a sketch on opaque paper over the lines of an old map. The first journey is that of the young men who came from Newfoundland’s outports, fields, villages and narrow city streets to join the storied regiment that led many of them to their deaths at Beaumont-Hamel during the Battle of the Somme on July 1, 1916. The second journey is the author’s, taken a century later as he walks in the footsteps of the dead men to discover what remains of their passage across land and through memory.

Part unconventional history, part memoir-travelogue, part philosophical inquiry, Michael Winter uniquely captures the extraordinary lives and landscapes, both in Europe and at home, scarred by a war that is just now disappearing from living memory. In subtle and surprising ways, he also tells the hidden story of the very act of remembering – of how the past bleeds into the present and the present corrals and shapes the past. As he wanders from battlefield to barracks to hospital to hotel, and finally to a bereft stretch of land battered by a blizzard back home, Winter gently but persistently unsettles us – startling us with the unexpected encounters and juxtapositions that arise from his physical act of walking through the places where the soldiers once marched, this time armed with artifacts and knowledge those earlier souls could not have, yet undone by the reality of their bodily presence beneath the earth.

In this unusual, poignant and beautiful book, Michael Winter gives us a new way of looking at a powerful piece of history that, he reminds us, continues to haunt our own lives.

"[With Into the Blizzard], I believe that Winter has offered the world a piece of his heart. . . . The writing far surpasses that of the standard CanLit non-fiction fare, even that which lands on the RBC Taylor Prize. . . . Into the Blizzard is a love letter to a province's sacrifice by a great Canadian writer."
—The Winnipeg Review

“[Into the Blizzard has] genuine intimacy and immediacy . . . a meditation not just about war and sacrifice but about memory and mythology and a past becoming fragmented by time.”
—Saskatoon StarPhoenix

“[An] often-riveting treatise on war. . . . A truly compelling voice and point of view. . . . Winter’s arguments may be familiar, but they’re made fresh and compelling by a troubling notion he introduces: that time might be diminishing our understanding of the war, not increasing it, leaving it simplistically reified, not furnished with nuance.” —The Globe and Mail

“Toronto-based, Newfoundland-raised author Michael Winter takes us along the winding path the men of Newfoundland Regiment followed during the First World War. . . . Part history, part travelogue and part author's musings on how our modern minds contemplate the past. . . . [A] poignant account.” —Winnipeg Free Press

“Michael Winter . . . has written a love letter to the soldiers who fought for the Royal Newfoundland Regiment during the First World War. . . . His lyrical writing and attention to detail are at their peak . . . [with] powerful imagery and detailed portraits of fragile human beings. As much as Winter may decry the war itself, he is ferociously proud of those who ‘faced the blizzard of machine-gun fire with their chins tucked into an advanced shoulder.’ Winter asks us never to lose sight of their lives, no matter how short or apparently inconsequential.”
—Quill & Quire, featured review