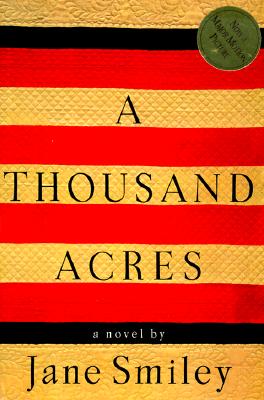 Smiley's Pulitzer Prize-winning novel is the modern retelling of Shakespeare's King Lear. When aging Larry Cook decides to divide his property among his three daughters, his youngest daughter Caroline thinks he is crazy and she is shut out. The turmoil that ensues brings truths to light concerning marriage, loss, abuse and aging. A book that touches us all.

A thousand acres, a piece of land of almost mythic proportions. Upon this fertile, nourishing earth, Jane Smiley has set her rich, breathtakingly dramatic novel of an American family whose wealth cannot stay the hand of tragedy. It is the intense, compelling story of a father and his daughters, of sisters, of wives and husbands, and of the human cost of a lifetime spent trying to subdue the land and the passions it stirs. The most critically acclaimed novel of the literary season, a classic story of contemporary American life, A THOUSAND ACRES is destined to be read for years to come.
"It has been a long time since a novel so surprised me with its power to haunt . . . . Its genius grows from its ruthless acceptance of the divided nature of every character . . . . This gives A THOUSAND ACRES the prismatic quality of the greatest art." -- Chicago Tribune
Winner of the Pulitzer Prize and the National Book Critics Circle Award

"From the Trade Paperback edition."