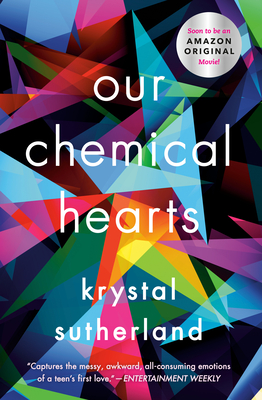 I loved this book when I started it- smart, funny, well-written- I was quickly invested in the characters and their lives.  Fans of John Green's "Looking for Alaska" will likely be fans of this debut author, and will eagerly anticipate her next work.

John Green meets Rainbow Rowell in this irresistible story of first love, broken hearts, and the golden seams that put them back together again.

Henry Page has never been in love. He fancies himself a hopeless romantic, but the slo-mo, heart palpitating, can't-eat-can't-sleep kind of love that he's been hoping for just hasn't been in the cards for him—at least not yet. Instead, he's been happy to focus on his grades, on getting into a semi-decent college and finally becoming editor of his school newspaper. Then Grace Town walks into his first period class on the third Tuesday of senior year and he knows everything's about to change.

Grace isn't who Henry pictured as his dream girl—she walks with a cane, wears oversized boys' clothes, and rarely seems to shower. But when Grace and Henry are both chosen to edit the school paper, he quickly finds himself falling for her. It's obvious there's something broken about Grace, but it seems to make her even more beautiful to Henry, and he wants nothing more than to help her put the pieces back together again. And yet, this isn't your average story of boy meets girl. Krystal Sutherland's brilliant debut is equal parts wit and heartbreak, a potent reminder of the bittersweet bliss that is first love.

Krystal Sutherland was born and raised in Townsville, Australia, a place that has never experienced winter. Since then she's lived in Sydney, where she edited her university's student magazine; Amsterdam, where she worked as a foreign correspondent; and Hong Kong. She has no pets and no children, but is fond of naming inanimate objects: in the Netherlands she owned a Dutch bicycle called Kim Kardashian, and a small, inflatable velociraptor called Herbert. Our Chemical Hearts is her debut novel.

Praise for Our Chemical Hearts:

“The most romantic read of the season is an arguably anti-YA story… It’s the complex chemistry between Henry and Grace that touches the heart and doesn’t let go.”—USA Today

“This book delves far deeper than the typical high school romance, and its savvy wordplay and Henry’s self-deprecating charm will win over fans of Stephen Chbosky’s The Perks of Being a Wallflower and John Green’s The Fault in Our Stars.”—School Library Journal

“Henry is surrounded by well-drawn friends and family, and Grace is a fascinating cipher, in a book that’s anything but a predictable romance.”—B&N Teen, “Most Anticipated October YA Books”

“I'm sorry to have to do this to you, but the love story of Henry and Grace is going to kick you in the emotional gut.”—Bustle, “Best New YA Novels Coming in October”

“Perhaps one of the most entertaining features of the novel is the irreverent and funny teen banter that masks their deeper feelings. Best of all, though, is the engaging story that unfolds at just the right pace, drawing the reader in as the stakes get higher and decisions must be made.”—VOYA

“Henry’s first language is clever, angst-driven wit, and this pair is as sharp and quippy as John Green’s Hazel and Gus … Fans of romance driven by stylized narration are the audience for this.”—BCCB