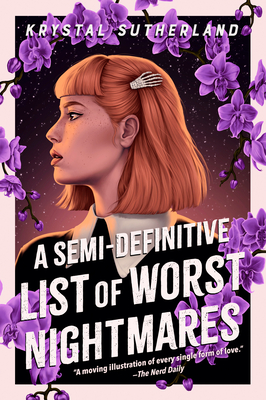 By Krystal Sutherland
Email or call for price

Esther's family has been ruled by fear ever since her grandfather met Death face-to-face and their family was cursed.  When an old classmate pickpockets her list of worst nightmares, a quest to face the things that terrify her is put into motion.  Quirky, tender, and full of compelling reasons to conquer what scares you, this is a thoughtful but hilarious book about death, anxiety, and love.  Absolutely one of the best new books this fall!

From the author of Our Chemical Hearts comes the hilarious, reality-bending tale of two outsiders facing their greatest fears about life and love—one debilitating phobia at a time.

Ever since Esther Solar’s grandfather was cursed by Death, everyone in her family has been doomed to suffer one great fear in their lifetime. Esther’s father is agoraphobic and hasn’t left the basement in six years, her twin brother can’t be in the dark without a light on, and her mother is terrified of bad luck.

The Solars are consumed by their fears and, according to the legend of the curse, destined to die from them.

Esther doesn’t know what her great fear is yet (nor does she want to), a feat achieved by avoiding pretty much everything. Elevators, small spaces and crowds are all off-limits. So are haircuts, spiders, dolls, mirrors and three dozen other phobias she keeps a record of in her semi-definitive list of worst nightmares.

Then Esther is pickpocketed by Jonah Smallwood, an old elementary school classmate. Along with her phone, money and a fruit roll-up she’d been saving, Jonah also steals her list of fears. Despite the theft, Esther and Jonah become friends, and he sets a challenge for them: in an effort to break the curse that has crippled her family, they will meet every Sunday of senior year to work their way through the list, facing one terrifying fear at a time, including one that Esther hadn’t counted on: love.

Krystal Sutherland was born and raised in Townsville, Australia—an inhospitable land where crocodiles, snakes, and jellyfish are always on the prowl. She grew up living directly across the road from the local library and spent almost every day after school (and weekends, too) having adventures between the pages of books (mainly because it was too dangerous to go outside).

She moved to Sydney for college (and safety), where she cut her writing teeth as the editor of the student magazine at the University of New South Wales. She kept gathering tales as an exchange student in Hong Kong and as a foreign correspondent in Amsterdam. Her first book, Our Chemical Hearts, was released in 2016, and was published in over twenty countries.

Her three greatest fears are heights, dark caves . . . and (perhaps worst of all) frogs.

“[A] bewitching book . . . Sutherland's fertile imagination makes this book a deep dive into the intricacies of family, friends, and personal history. . . . A fresh and compelling look at mental illness.”—Kirkus Reviews

“[A] darkly ironic tale about an offbeat dysfunctional family.”—Publishers Weekly

“Rainbow Rowell devotees, John Green junkies, and fans of This Song Will Save Your Life by Leila Sales will find a lot to love here.”—School Library Journal

“[I]mmediately hooks readers . . . Libraries should purchase this for readers looking for something quite out of the ordinary.”—VOYA

“Dark, magical, and humorous, this is a quirky and cohesive novel about fear, depression, and obsession with death.”—Booklist

“[A] magical take on mental illness that feels very real.”—Bustle

“The story is fantastic. Making the most of magic realism and with a perfectly paced plot, easy-to-love characters, and a touching array of interesting and relevant topics, Sutherland’s book should be on everyone’s bookshelves…an alluring exploration of the human mental landscape.”—The Nerd Daily

“Entirely pure pleasure, a sweet and heartfelt story of love, fear, and mental illness. It’s funny and touching in all the best ways.”—Vox

“The most romantic read of the season is an arguably anti-YA story… It’s the complex chemistry between Henry and Grace that touches the heart and doesn’t let go.”—USA Today

“This book delves far deeper than the typical high school romance, and its savvy wordplay and Henry’s self-deprecating charm will win over fans of Stephen Chbosky’s The Perks of Being a Wallflower and John Green’s The Fault in Our Stars.”—School Library Journal

“I'm sorry to have to do this to you, but the love story of Henry and Grace is going to kick you in the emotional gut.”—Bustle, “Best New YA Novels Coming in October”