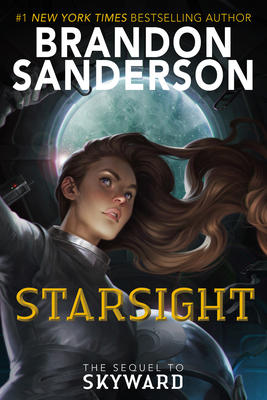 This is book number 2 in the Skyward series.

Oh, the unexpected surprises revealed in Starsight! Some gave me answers to mysteries from book 1. Others left me with new questions and now I really can’t wait for book 3. I want to know what will happen to Spensa, M-bot, and their world. Sanderson has written a tightly woven novel that pushed, pushed, pushed me to read until this story was done. Ah, now I can finally breathe! And yes, this sci-fi story is for both guys and girls and for fans of fantasy or dystopian.

From the #1 New York Times bestselling author of the Reckoners series, the Mistborn trilogy, and the Stormlight Archive comes the second book in an epic series about a girl with a secret in a dangerous world at war for humanity's future.

All her life, Spensa's dreamed of becoming a pilot and proving herself a hero like her father. She made it to the sky, but the truths she learned there were crushing. The rumors of her father's cowardice are true--he deserted his Flight during battle against the Krell. Worse, though, he turned against his team and attacked them.

Spensa is sure that there's more to the story. And she's sure that whatever happened to her father that day could happen to her. When she made it outside the protective shell of her planet, she heard the stars--and what they revealed to her was terrifying. Everything Spensa has been taught about her world is a lie.

Humankind has always celebrated heros, but who defines what a hero is? Could humanity be the evil the galaxy needs to be protected from? Spensa is determined to find out, but each answer she discovers reveals a dozen new questions: about the war, about her enemies, and even, perhaps, about Spensa herself.

But Spensa also discovered a few other things about herself--and she'll travel to the end of the galaxy to save humankind if she needs to.

"Sanderson delivers a cinematic adventure that explores the defining aspects of the individual versus the society. . . . Fans of Sanderson will not be disappointed." --SLJ

"It is impossible to turn the pages fast enough." --Booklist

"He's simply a brilliant writer. Period." --Patrick Rothfuss, author of the New York Times bestseller The Name of the Wind, on Brandon Sanderson.

Brandon Sanderson is the author of the #1 New York Times bestselling Reckoners series: Steelheart, Firefight, and Calamity and the e-original Mitosis; the New York Times bestseller Skyward and its sequel Starsight; the internationally bestselling Mistborn trilogy; and the Stormlight Archive. He was chosen to complete Robert Jordan's The Wheel of Time series. His books have been published in more than twenty-five languages and have sold millions of copies worldwide. Brandon lives and writes in Utah. To learn more about him and his books, visit him at brandonsanderson.com or follow @BrandSanderson on Twitter and Instagram.

“No one has more fun writing or is better at describing galactic dogfights…. Read the first one for fun or enjoy the second on its own.” —Booklist

Praise for Skyward, Book One:

"Reading this book is like standing inside a video game: all action and movement. Sanderson’s aerial dogfights are so masterful that it is impossible to turn the pages fast enough."—Booklist

"With this action-packed trilogy opener, Sanderson offers up a resourceful, fearless heroine and a memorable cast."—Publishers Weekly, Starred Review 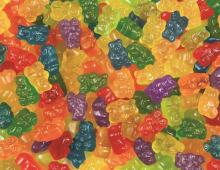