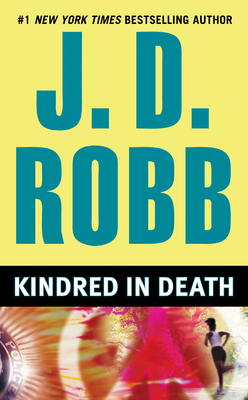 This is book number 29 in the In Death series.

When the newly promoted captain of the NYPSD and his wife return a day early from their vacation, they are looking forward to spending time with their bright and vivacious sixteen-year-old daughter, who stayed behind.

Not even their worst nightmares could prepare them for the crime scene that awaits them instead. Deena has been brutally murdered in her bedroom, and her body shows signs of trauma that horrifies even the toughest of cops, including Lieutenant Eve Dallas, who is specifically requested by the captain to investigate.

When the evidence starts to pile up, Dallas and her team think they are about to arrest their perpetrator; little do they know that someone has gone to great lengths to tease and taunt them by using a variety of identities.

Overconfidence can lead to careless mistakes. But for Dallas, one mistake might be all she needs to serve justice.

Praise for Kindred in Death

“Robb combines sex, horrific crime, forensics and technological wizardry for another winner sure to please her many fans.”—Publishers Weekly

“The emotional quotient is high in this chapter of the long-running and truly excellent In Death series. One key to its longevity is that each succeeding book adds new layers of complexity to Eve, Roarke and the rest of Robb's supporting players. Robb's ability to take readers from emotional highs to lows and insert a clever mystery is why this series never gets old.”—RT Book Reviews

More Praise for J. D. Robb and the In Death series