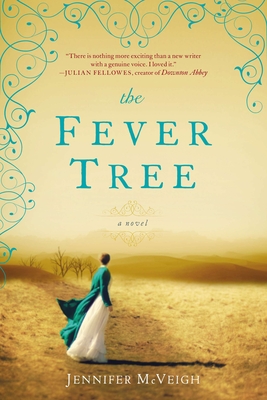 The Fever Tree is a journey that brings us along from late 19th century
London to South Africa during the diamond frenzy. We learn of political
scandal and follow the young woman at the heart of this novel. We see
the evolution from entitled wealth to survival in the African desert.
Based on true events, this can be gritty at times – a ruthless ride. I
loved the sensually described relationships and beautifully portrayed
landscapes. A must read for Out of Africa and Downton Abbey fans.

“There is nothing more exciting than a new writer with a genuine voice. I loved it.” —Julian Fellowes, creator of Downton Abbey

Frances Irvine, left destitute in the wake of her father’s sudden death, has been forced to abandon her life of wealth and privilege in London and emigrate to the Southern Cape of Africa. 1880 South Africa is a country torn apart by greed. In this remote and inhospitable land she becomes entangled with two very different men—one driven by ambition, the other by his ideals. Only when the rumor of an epidemic takes her into the dark heart of the diamond mines does Frances see her road to happiness.

But before she can follow that path, Frances must choose between passion and integrity, between her desire for the man who captured her heart and her duty to the man who saved her from near ruin, a decision that will have devastating consequences.

Jennifer McVeigh graduated from Oxford University in 2002 with a First in English literature. She went on to work in film, television, radio, and publishing, before giving up her day job to write fiction.

“Debut author Jennifer McVeigh has created a fully realized sensory tour of 19th-century South Africa: You feel the grit of each dust storm, taste the mealie Frances chokes down, hear the cicadas scraping through the heat-parched air along with Frances’ plaintive piano playing. Against this desperate backdrop is an exploration of the vicissitudes of passion, the brutality of imperialism and the diamond trade's deeply racist beginnings. Though the book is a page-turner of the ‘who will she choose?’ variety right until the end, the most fascinating strand of the story is Frances, and her struggles to come to terms with her new ideas about society, marriage, family and love.” —Oprah.com

“Fabulous … this debut novel displays real power. McVeigh brings alive the diamond mines, the boom-or-bust frenzy created by instant wealth, the hostility between the Dutch-speaking Boers and the new British colonists. It also conveys the arid beauty of the sun-drenched terrain with its spiders, snakes and meerkats. Most of all, McVeigh captures how greed and racism blinded whites to the savage mistreatment of the black Africans being robbed of their land and its wealth. History has rarely been more vividly presented.” —USA Today

“A page-turner to tempt you.” —Good Housekeeping

“There is nothing more exciting than a new writer with a genuine voice. I loved it.” —Julian Fellowes, creator of Downton Abbey

“McVeigh has imagined a rich and dramatic story.”—The Washington Post

“[A] bewitching tale of loss, betrayal and love.” —Vogue, UK

“McVeigh’s distinctive first novel is a lush, sweeping take of willful self-deception. . . . [t]he sensory detail and sweep of the novel are exquisite, particularly for a debut.” —Publishers Weekly

“Read England's hottest book! The Fever Tree by Jennifer McVeigh is already a bestseller in the UK (Downton Abbey creator Julian Fellows is a fan!).”—Woman’s World

“While epic in both geographic and emotional scope, it also does a lovely job of illuminating how easy it is to see everything we lack and how hard it is to see what’s already in front of us. It’s earned comparisons to both Gone with the Wind and Out of Africa.” —Examiner.com

“Fans of romantic classics such a The Thorn Birds and A Woman of Substance will be thrilled to discover McVeigh.” —San Antonio Express-News

“Forceful and direct, yet surprisingly lyrical, McVeigh’s narrative weaves top-notch research and true passion for the material with a well-conceived plot. . . . Overall, this story’s a gem.” —Kirkus Reviews

"With its cinematic descriptions and compulsively readable plotline, this debut novel may well become a book-club favorite. . . . With its social-justice angle; exotic, ruggedly beautiful location; and universal theme of emotional growth, this will have wide appeal.” —Booklist

“[R]iveting debut . . . McVeigh’s exhaustive research shines through . . . The Fever Tree is an engaging read; its capricious heroine grabs you from the start, urging you to ride out her journey before the morning alarm rings.” —BookPage

“The Fever Tree is vividly written, and moves so fluidly from Victorian drawing rooms to the wild, spare plains and brutal diamond mines of South Africa; place and people come alive in this book…. A gripping story—I found myself thinking of scenes from this book long after I had turned the last page.” —Kim Edwards, New York Times bestselling author

“An orphaned young gentlewoman, a shipboard romance en route to a strange and perilous land, a forced marriage to an enigmatic stranger . . .  The Fever Tree serves up all the delicious elements of a romantic classic, seasoned by evocative prose and keen moral commentary. Gobble it up and then shelve it next to the Brontë sisters.” —Hillary Jordan, author of Mudbound

“I loved it. I found Frances very convincing as a quiet but deep and passionate Victorian Englishwoman making her way in the most unfamiliar and grueling of circumstances in colonial South Africa. Jennifer McVeigh brilliantly evokes her life and times and the vast, unforgiving landscape. It’s a beautifully written novel of great feeling.” —Rachel Hore, bestselling author of The Place of Secrets and A Gathering Storm

“Jennifer McVeigh writes with perception and grace. This is an epic story of love, deception, and courage, and a young woman’s journey of self-discovery in a country of spectacular beauty.” —Patricia Wastvedt, author of The German Boy

“I whizzed through it and the writing was flawless and I was in awe of the breadth and scope. It is a rattling good read.” —Suzannah Dunn, author of The Confession of Katherine Howard and The Sixth Wife

“A world of red dust plains, pioneering grit, and the cruelty of colonial greed. Vividly described and supremely well-paced, this is an unforgettable journey into a heart of darkness.” —Deborah Lawrenson, author of The Lantern