The Rebel Pirate (Renegades of the American Revolution #2) (Paperback) 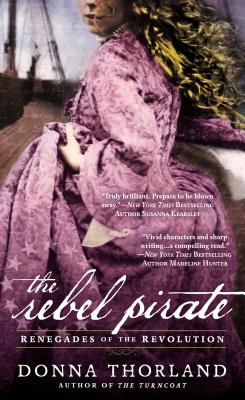 By Donna Thorland
Email or call for price.
Special Order

“Let Donna Thorland sweep you back to the American Revolution, into a world of spies, suspense, skullduggery, and sex.”—New York Times Bestselling Author William Martin

1775, Boston Harbor. James Sparhawk, Master and Commander in the British Navy, knows trouble when he sees it. The ship he’s boarded is carrying ammunition and gold…into a country on the knife’s edge of war. Sparhawk’s duty is clear: confiscate the cargo, impound the vessel and seize the crew. But when one of the ship’s boys turns out to be a lovely girl, with a loaded pistol and dead-shot aim, Sparhawk finds himself held hostage aboard a Rebel privateer.

Sarah Ward never set out to break the law. Before Boston became a powder keg, she was poised to escape the stigma of being a notorious pirate’s daughter by wedding Micah Wild, one of Salem’s most successful merchants. Then a Patriot mob destroyed her fortune and Wild played her false by marrying her best friend and smuggling a chest of Rebel gold aboard her family’s ship.

Now branded a pirate herself, Sarah will do what she must to secure her family’s safety and her own future. Even if that means taking part in the cat and mouse game unfolding in Boston Harbor, the desperate naval fight between British and Rebel forces for the materiel of war—and pitting herself against James Sparhawk, the one man she cannot resist.

Graduating from Yale with a degree in Classics and Art History, Donna Thorland managed architecture and interpretation at the Peabody Essex Museum in Salem, MA, for several years. She then earned an MFA in film production from the University of Southern California School of Cinematic Arts. She has been a Disney/ABC Television Writing Fellow and a WGA Writer’s Access Project Honoree, has written for the TV shows Cupid and Tron: Uprising, and is a writer on the WGN drama Salem. The director of several award-winning short films, her most recent project aired on WNET Channel 13. Her fiction has appeared in Alfred Hitchcock’s Mystery Magazine. She is the author of the Renegades of the American Revolution series, including The Turncoat, The Rebel Pirate, Mistress Firebrand, and The Dutch Girl.

Praise for The Rebel Pirate

“[A] sexy, dangerous gallop through the American Revolution.  Swashbuckling high seas adventure crossed with desire-driven romance, all dished up with perfect historical detail from head to heel.”—Bee Ridgeway, author of The River of No Return