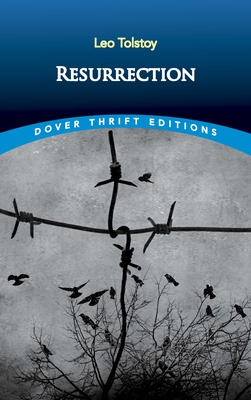 By Leo Tolstoy
Email or call for price.
Out of Print

This poignant study of spiritual regeneration recounts the sins of a Russian nobleman, Prince Dmitri Ivanovich Nekhlyudov, and his attempts in later life to redress his transgressions. Tolstoy conducts readers on a harrowing voyage through Russia's corrupt courts and foul prisons that culminates in a ruthless march to Siberia. A powerful depiction of the injustices of the legal system, the novel assails the vices of petty officialdom and the hypocrisy of organized religion.
Today Resurrection is less widely known and honored than the author's earlier works, War and Peace and Anna Karenina, but the story was an immense success upon its serial publication in 1899. A panoramic view of Russian social life at the end of the nineteenth century, this darkly compelling tale offers a vivid portrait of the conflict between wealthy aristocrats and starving peasants that erupted into the 1917 revolution.

Novelist, essayist, dramatist, and philosopher, Count Leo Tolstoy (1828-1910) is most famous for his sprawling portraits of 19th-century Russian life, as recounted in Anna Karenina and War and Peace.