In Too Deep: Book One of the Looking Glass Trilogy (An Arcane Society Novel #10) (Mass Market) 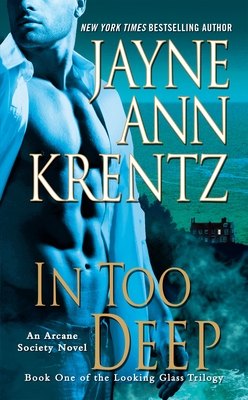 By Jayne Ann Krentz
$8.99
Email or call for price

This is book number 10 in the An Arcane Society Novel series.

Scargill Cove is the perfect place for Fallon Jones, confirmed recluse and investigator of the paranormal. It’s a hot spot, a convergence point for unusually strong currents of energy, which might explain why the town attracts misfits and drifters like moths to a flame. Now someone else has been drawn to the Cove—Isabella Valdez, on the run from some very dangerous men.

When she starts work as Fallon’s assistant, Isabella impresses him by organizing his pathologically chaotic office—and doesn’t bat an eye at the psychic aspect of his job. She’s a kindred spirit, a sanctuary from a world that considers his talents a form of madness. But after a routine case unearths an antique clock infused with dark energy, Fallon and Isabella are dragged into the secret history of Scargill Cove and forced to fight for their lives, as they unravel a cutthroat conspiracy with roots in the Jones family business...and Isabella’s family tree.

Jayne Ann Krentz is the author of more than fifty New York Times bestsellers. She has written contemporary romantic suspense novels under that name, as well as futuristic and historical romance novels under the pseudonyms Jayne Castle and Amanda Quick, respectively. There are more than 35 million copies of her books in print.

Praise for In Too Deep

“Krentz never rests on her laurels, carefully crafting a story that works on every level: as a detective novel, a paranormal thriller, and a romance.”—Publishers Weekly (starred review)

“A joy to read.”—Fresh Fiction

“A well-written, imaginative story with complex and intriguing characters.”—New York Journal of Books