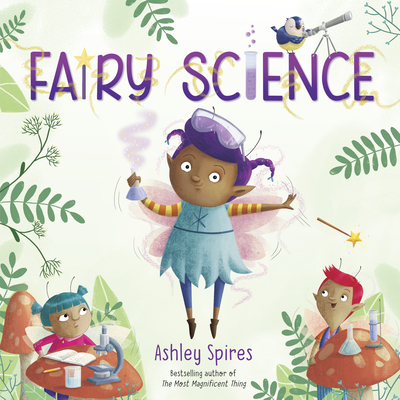 A clever combo of magic and science! Can Esther use her love of facts and data to solve a problem and make her fellow fairies believe in science, too?

An enchanting STEM-and-fairy-filled picture book from the award-winning author-illustrator of The Most Magnificent Thing!

All the fairies in Pixieville believe in magic--except Esther. She believes in science.

When a forest tree stops growing, all the fairies are stumped--including Esther. But not for long! Esther knows that science can get to the root of the problem--and its solution!

Whether you believe in fairy magic or the power of science, you will be charmed by Esther, the budding fairy scientist.

Ashley Spires is the author and illustrator of many books, including the bestselling The Most Magnificent Thing and the Binky the Space Cat series. She can usually be found making books, with a cup of tea and a pile of chocolate close at hand. While science was never her strongest subject in school, she's a big believer that there's a scientific explanation for everything--except maybe the internet. That is obviously 100 percent magic. Ashley lives in Ladner, British Columbia, with her husband, her dog, and far too many cats.

"Readers will adore smart and scrappy Esther’s indomitable spirit and the silly yet effective juxtaposition of fairy tale and scientific inquiry.” –Booklist

"Fans of Ada Twist, Scientist, by Andrea Beaty and illustrated by David Roberts (2016), and Charlotte the Scientist Is Squished, by Camille Andros and illustrated by Brianne Farley (2017), will enjoy Esther's tale. A magical addition to the STEM shelf.” –Kirkus