The Soul of America: The Battle for Our Better Angels (CD-Audio) 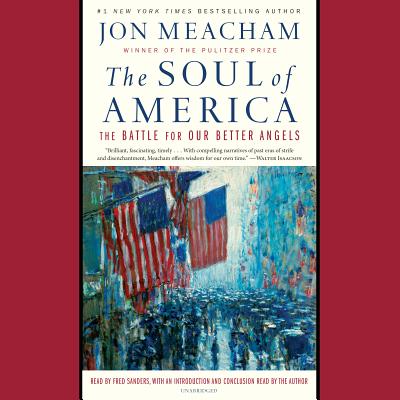 Thus far, this is my favorite read of 2018. Meacham’s vivid writing shows me how many of America’s most difficult political and social struggles - voting and civil rights, KKK uprisings, and McCarthyism - have served to strengthen America’s resolve to liberty and justice. Meacham exquisitely depicts that our history proves that Americans will successfully get beyond today’s political chaos.

#1 NEW YORK TIMES BESTSELLER • Pulitzer Prize–winning author Jon Meacham helps us understand the present moment in American politics and life by looking back at critical times in our history when hope overcame division and fear.

Our current climate of partisan fury is not new, and in The Soul of America Meacham shows us how what Abraham Lincoln called the “better angels of our nature” have repeatedly won the day. Painting surprising portraits of Lincoln and other presidents, including Ulysses S. Grant, Theodore Roosevelt, Woodrow Wilson, Franklin D. Roosevelt, Harry S. Truman, Dwight Eisenhower, and Lyndon B. Johnson, and illuminating the courage of such influential citizen activists as Martin Luther King, Jr., early suffragettes Alice Paul and Carrie Chapman Catt, civil rights pioneers Rosa Parks and John Lewis, First Lady Eleanor Roosevelt, and Army-McCarthy hearings lawyer Joseph N. Welch, Meacham brings vividly to life turning points in American history. He writes about the Civil War, Reconstruction, and the birth of the Lost Cause; the backlash against immigrants in the First World War and the resurgence of the Ku Klux Klan in the 1920s; the fight for women’s rights; the demagoguery of Huey Long and Father Coughlin and the isolationist work of America First in the years before World War II; the anti-Communist witch-hunts led by Senator Joseph McCarthy; and Lyndon Johnson’s crusade against Jim Crow. Each of these dramatic hours in our national life have been shaped by the contest to lead the country to look forward rather than back, to assert hope over fear—a struggle that continues even now.

While the American story has not always—or even often—been heroic, we have been sustained by a belief in progress even in the gloomiest of times. In this inspiring book, Meacham reassures us, “The good news is that we have come through such darkness before”—as, time and again, Lincoln’s better angels have found a way to prevail.

Praise for The Soul of America

“Brilliant, fascinating, timely . . . With compelling narratives of past eras of strife and disenchantment, Meacham offers wisdom for our own time.”—Walter Isaacson

“Gripping and inspiring, The Soul of America is Jon Meacham’s declaration of his faith in America.”—Newsday

“Meacham gives readers a long-term perspective on American history and a reason to believe the soul of America is ultimately one of kindness and caring, not rancor and paranoia.”—USA Today

Jon Meacham is a Pulitzer Prize–winning biographer. The author of the New York Times bestsellers Thomas Jefferson: The Art of Power, American Lion: Andrew Jackson in the White House, Franklin and Winston, Destiny and Power: The American Odyssey of George Herbert Walker Bush, and The Soul of America: The Battle for Our Better Angels, he is a distinguished visiting professor at Vanderbilt University, a contributing writer for The New York Times Book Review, and a fellow of the Society of American Historians. Meacham lives in Nashville and in Sewanee with his wife and children.

“Appalled by the ascendancy of Donald J. Trump, and shaken by the deadly white nationalist rallies in Charlottesville in 2017, Meacham returns to other moments in our history when fear and division seemed rampant. He wants to remind us that the current political turmoil is not unprecedented, that as a nation we have survived times worse than this. . . . Meacham tries to summon the better angels by looking back at when America truly has been great. He is effective as ever at writing history for a broad readership. . . . [Meacham] is an adroit and appealing storyteller.”—The New York Times Book Review

“Gripping and inspiring, The Soul of America is Jon Meacham’s declaration of his faith in America. . . . Meacham, by chronicling the nation’s struggles from revolutionary times to current day, makes the resonant argument that America has faced division before—and not only survived it but thrived. . . . Meacham believes the nation will move beyond Trump because, in the end, as they have shown on vital issues before, Americans embrace their better angels. This book stands as a testament to that choice—a reminder that the country has a history of returning to its core values of freedom and equality after enduring periods of distraction and turmoil.”—Newsday

“Meacham tells us we’ve been here before and can find our way out, urging readers to enter the arena, avoid tribalism, respect facts and listen to history.”—The Washington Post

“Meacham has become one of America’s most earnest and thoughtful biographers and historians. . . . He employs all of those skills in The Soul of America, a thoroughly researched and smoothly written roundup of some of the worst parts of American history and how they were gradually overcome. . . . Meacham gives readers a long-term perspective on American history and a reason to believe the soul of America is ultimately one of kindness and caring, not rancor and paranoia. Finally, Meacham provides advice to find our better angels—enter the arena, resist tribalism, respect facts and deploy reason, find a critical balance and keep history in mind. He’s provided a great way to do it.”—USA Today

“This is a brilliant, fascinating, timely, and above all profoundly important book. Jon Meacham explores the extremism and racism that have infected our politics, and he draws enlightening lessons from the knowledge that we’ve faced such trials before. We have come through times of fear. We have triumphed over our dark impulses. With compelling narratives of past eras of strife and disenchantment, Meacham offers wisdom for our own time and helps us appreciate the American soul: the heart, the core, and the essence of what it means to have faith in our nation.”—Walter Isaacson