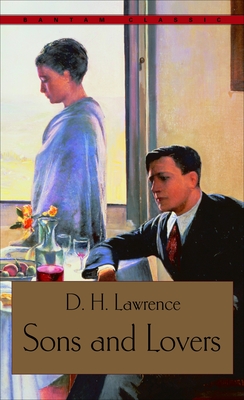 Since its publication in 1913, D. H. Lawrence's powerful and passionate third novel stands as one of the greatest autobiographical novels of the twentieth century. Here is the story of artist Paul Morel as a young man, his powerful relationship with his possessive mother, his passionate love affair with Miriam Leivers, his intense liaison with married Clara Dawes. Here, too, England's Derbyshire springs to life with both is sooty mining villages and deep green pastures, a setting as full of contrasts as the deep emotions that rule this remarkable book.

Sons and Lovers is rich with universal truths about relationships; moreover, it brims with what Alfred Kazin has called Lawrence's "magic sympathy, between himself and life." Continues Mr. Kazin: "No other writer of his imaginative standing has in our time written books that are so open to life...Since for Lawrence the great subject of literature was not the writer's own consciousness but consciousness between people, the living felt relationship between them, it was his very concern to represent the 'shimmer' of life, the 'wholeness'...that made possible his brilliance as a novelist."

With an Introduction by John Gross

David Herbert (D. H.) Lawrence, whose fiction has had a profound influence on twentieth-century literature, was born on September 11, 1885, in a mining village in Nottinghamshire, England. His father was an illiterate coal miner, his mother a genteel schoolteacher determined to lift her children out of the working class. His parents' unhappy marriage and his mother's strong emotional claims on her son later became the basis for Lawrence's Sons and Lovers (1913), one of the most important autobiographical novels of this century.

In 1915, his masterpiece, The Rainbow, which like it's companion novel Women In Love (1920) dealt frankly with sex, was suppressed as indecent a month after its publication. Aaron's Road (1922); Kangaroo (1923), set in Australia; and The Plumed Serpent (1926), set in Mexico, were all written during Lawrence's travels in search of political and emotional refuge and healthful climate. In 1928, already desperately ill, Lawrence wrote Lady Chatterly's Lover. Banned as pornographic, the unexpurgated edition was not allowed legal circulation in Britain until 1960. D. H. Lawrence called his life, marked by struggle, frustration, and despair "a savage enough pilgrimage." He died on March 2, 1930, at the age of forty-four, in Vence, France.

The Modern Library of the World's Best Books

"No other writer with his imaginative standing has in our time written books that are so open to life."

"There is no novel in english literature which comes so close to the skin of life of working class people, for it records their feelings in their own terms."