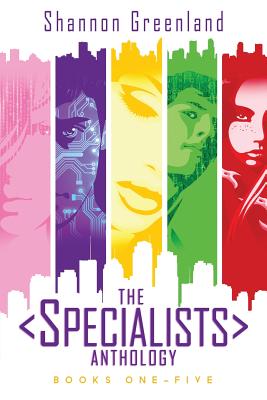 This 700+ page book includes all five stories in the bestselling, award-winning, teen spy series, THE SPECIALISTS. With thousands of five-star reviews on Goodreads, it's pages full of intrigue, adventure, bad guys, fun gadgets, and romance

TEEN GENIUS, GIGI, IS IN A LOT OF HOT WATER.

A whiz with computers, she agrees to help her college RA, David, uncover some top-secret information. After all, she doesn't have any family or many friends and David has always been nice to her. It doesn't hurt that he's super cute and irresistible, too. All she has to do is hack into the government's main computer system.

But a few hours later, her whole life changes. She is caught and taken in for questioning, only this isn't your run-of-the-mill arrest. Rather than serve a juvenile detention sentence, she accepts the option to change her name and enlist in a secret government spy agency that trains orphaned teens to go undercover.

As if that wasn't overwhelming enough, she discovers that David works for this agency as well And before she even begins to understand what is going on, she's sent on her first mission as an undercover model. And who better to partner with than David himself But can she pull this off, or will she lose the only family she's come to know?