For the People: A Story of Justice and Power (Hardcover) 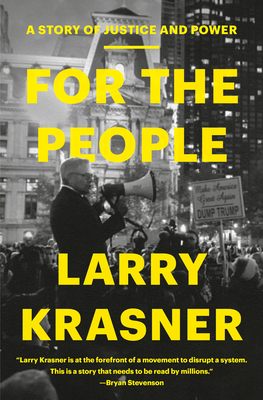 Philadelphia’s progressive district attorney offers an inspiring vision of how people can take back power to reform criminal justice, based on lessons from a life’s work as an advocate for the accused.

“Larry Krasner is at the forefront of a movement to disrupt a system. This is a story that needs to be read by millions.”—Bryan Stevenson, author of Just Mercy

Larry Krasner spent thirty years learning about America’s carceral system as a civil rights and criminal defense lawyer in Philadelphia, working to get some kind of justice for his clients in a broken system, before deciding that the way to truly transform the system was to get inside of it. So he launched an unlikely campaign to become the district attorney of Philadelphia, a city known for its long line of notorious “tough on crime” DAs who had turned Philly into a city with one of the highest rates of incarceration in the country. Despite long odds and derisive opposition from the police union and other forces of the status quo, Krasner laid out a simple case for radical reform and won the November general election by a margin of nearly 50 percent.

For the People is not just a story about Krasner’s remarkable early life as a defense lawyer and his powerful, grassroots campaign; it’s also a larger exploration of how power and injustice conspired to create a carceral state unprecedented in the world. Readers follow Krasner’s lifelong journey through the streets and courtrooms and election precincts of one American city all the way up to his swearing-in ceremony to see how our system of injustice was built—and how we might dismantle it.

In the tradition of powerful critiques of the criminal justice system, from Bryan Stevenson’s Just Mercy to Michelle Alexander’s The New Jim Crow, For the People makes the powerful case that transforming criminal justice is the most important civil rights movement of our time and can only be done if we’re willing to fight for the power to make a change.

“Larry Krasner’s story is astonishing and compelling because he’s flipping the script. After decades of police and prosecutors being lionized in our culture, Krasner rises to power promising to defend the lambs. This is a story not to be missed.”—Michelle Alexander, author of The New Jim Crow