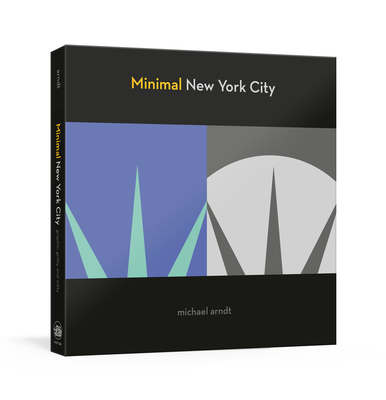 Make your way from the Flatiron to Flatbush as an award-winning designer expertly captures New York City with minimalist art and unexpected wit.

Minimal New York City playfully captures the essence of New York with clever pairs of sharp illustrations and cheeky commentary about the city. Historic context for each illustration is revealed in the back of the book, making it an informative experience for anyone who has ever walked through the bright lights of Times Square, paid $13 for an avocado toast, or indulged in Junior's Cheesecake on Flatbush. Minimal New York City is a celebration of what makes New York New York.

As a lifelong resident of New York state who has spent nearly twenty-five years living on the Upper West Side of Manhattan, Michael Arndt has poured his wealth of insider knowledge into Minimal New York City, a graphic love letter dedicated to the place he calls home. His references run the gamut from visual similarities between Central Park and Brooklyn's parks to the ways in which Times Square has evolved from the '70s to today. His visual and verbal wit make the graphics of New York approachable for New Yorkers and Big Apple fanatics alike.

Michael Arndt is an award-winning graphic designer and author/illustrator. His books include Cat Says Meow and other animalopoeia, My Heart Grows, One Yellow Sun, and Thoughts Are Air. He lives minimally in New York with his dog Clooney and cat Greta.