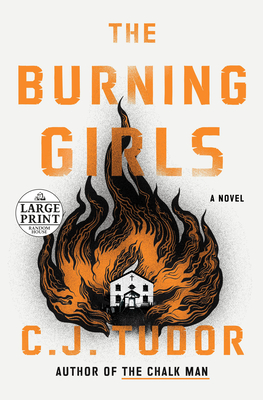 C.J. Tudor’s latest is a gothic thriller tinged with horror. When Reverend Jack Brooks and teenaged daughter Flo move to a tiny village in Sussex, England, they are aware that the village has a dark past as a place where accused heretics were burned in the 16th century, but not how much this haunts the present. Set aside time for this one, you won’t be able to put it down!

An unconventional vicar must exorcise the dark past of a remote village haunted by death and disappearances in this explosive and unsettling thriller from the acclaimed author of The Chalk Man.

A dark history lingers in Chapel Croft. Five hundred years ago, Protestant martyrs were betrayed—then burned. Thirty years ago, two teenage girls disappeared without a trace. And a few weeks ago, the vicar of the local parish hanged himself in the nave of the church.

Reverend Jack Brooks, a single parent with a fourteen-year-old daughter and a heavy conscience, arrives in the village hoping for a fresh start. Instead, Jack finds a town rife with conspiracies and secrets, and is greeted with a strange welcome package: an exorcism kit and a note that warns, “But there is nothing covered up that will not be revealed and hidden that will not be known.”

The more Jack and daughter, Flo, explore the town and get to know its strange denizens, the deeper they are drawn into the age-old rifts, mysteries, and suspicions. And when Flo begins to see specters of girls ablaze, it becomes apparent there are ghosts here that refuse to be laid to rest.

Uncovering the truth can be deadly in a village with a bloody past, where everyone has something to hide and no one trusts an outsider.

C. J. Tudor is the author of The Hiding Place and The Chalk Man, which won the International Thriller Writers Award for Best First Novel and the Strand Magazine Award for Best Debut Novel. Over the years she has worked as a copywriter, television presenter, voice-over artist, and dog walker. She is now thrilled to be able to write full-time, and doesn't miss chasing wet dogs through muddy fields all that much. She lives in England with her partner and daughter.

Praise for C. J. Tudor and The Burning Girls

“Tudor is terrific. I can’t wait to see what she does next.”—Harlan Coben

“Some writers have it, and some don’t. Tudor has it big-time.”—Lee Child

“Tudor is always several steps ahead. She is a brilliant storyteller.”—Alex Michaelides, New York Times bestselling author of The Silent Patient

“Tudor is the queen of the cliffhanger.”—John Marrs, international bestselling author of The Passengers

“Tudor has proven that she is a true master at creating perfectly dark, highly propulsive, and tightly coiled mysteries that are utterly impossible to put down.”—Aimee Molloy, New York Times bestselling author of The Perfect Mother

“If you like Tana French, you will love, love, love C. J. Tudor.”—Alma Katsu, author of The Hunger

“C. J. Tudor is turning out some of the best supernatural fiction around. And in The Burning Girls, her signature blend of self-aware characters and ancient evils is on full display.”—CrimeReads, “The Most Anticipated Crime Books of 2021”

“The kind of novel that’s so creepy, it might just seep into your dreams.”—Popsugar, “12 Thriller and Mystery Reads Sure to Keep You Inside This February”

“Tudor . . . strikes again with another thriller filled with twists and turns right up to the mind-bending ending.”—Library Journal

“Rarely have the secrets of an English village been used to greater effect than in this tautly suspenseful mystery from Thriller Award–winner Tudor. . . . The tension become[s] nearly unbearable. Tudor expertly doles out the plot twists . . . one so shocking that it turns the entire story inside out. Jack, Flo, and the other fully realized characters and their eventual fates won’t be easily forgotten by any reader.”—Publishers Weekly (starred review)

“Fans of Gillian Flynn, Tana French, and Jess Lourey will leap at the chance to read Tudor’s new psychological thriller. . . . Tudor is undeniably talented at producing a slow burn, weaving each piece of the story together to form a creepy yet satisfying conclusion. Jack is a relatable protagonist, stepping away from the stereotypical personality of a vicar by projecting a raw, yet still empathetic, exterior. Gruesome and haunting, The Burning Girls is worth every page turn. Readers will surely be eager for more.”—Booklist (starred review)

“The author steadily cranks up the scares and the suspense while smoothly toggling between multiple narratives. . . . Jack is immensely appealing. . . . Readers will savor the final, breathless twists. Top-notch and deliciously creepy storytelling.”—Kirkus Reviews