Out of the Corner: A Memoir (Hardcover) 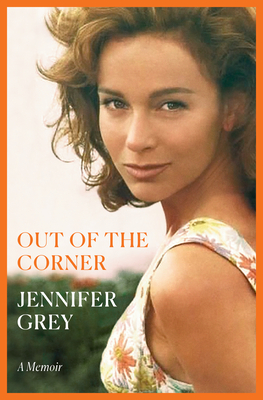 “Jennifer Grey peels back all the artifice, denial, obfuscation, and myriad assumptions and exposes a gorgeous, human portrait of her life.”—Jamie Lee Curtis

“We all know Jennifer Grey as a talented actress, but Out of the Corner introduces us to a gifted writer.”—Michael J. Fox

In this beautiful, close-to-the bone account, Jennifer Grey takes readers on a vivid tour of the experiences that have shaped her, from her childhood as the daughter of Broadway and film legend Joel Grey, to the surprise hit with Patrick Swayze that made her America’s sweetheart, to her inspiring season eleven win on ABC’s Dancing with the Stars.

Throughout this intimate narrative, Grey richly evokes places and times that were defining for a generation—from her preteen days in 1970s Malibu and wild child nights in New York’s club scene, to her roles in quintessential movies of the 1980s, including The Cotton Club, Red Dawn, and her breakout performance in Ferris Bueller’s Day Off. With self-deprecating humor and frankness, she looks back on her unbridled, romantic adventures in Hollywood. And with enormous bravery, she shares the devastating fallout from a plastic surgery procedure that caused the sudden and stunning loss of her professional identity and career. Grey inspires with her hard-won battle back, reclaiming her sense of self from a culture and business that can impose a narrow and unforgiving definition of female worth. She finds, at last, her own true north and starts a family of her own, just in the nick of time.

Distinctive, moving, and powerful, told with generosity and pluck, Out of the Corner is a memoir about a never-ending personal evolution, a coming-of-age story for women of every age.

Jennifer Grey is best known for her iconic portrayal of Baby in the beloved film classic Dirty Dancing, which earned her a Golden Globe nomination for Best Actress, and for her breakout role, as Matthew Broderick’s sister in John Hughes’s Ferris Bueller’s Day Off. Her numerous film, television, and theater credits span decades. More recently, she starred in the acclaimed series Red Oaks and won season eleven of Dancing with the Stars. Grey is currently teaming up with Lionsgate as executive producer and to star in the long-awaited Dirty Dancing sequel. Grey lives in Los Angeles.

“What is truth? How does someone make sense of their life lived through a public lens? In Out of the Corner, Jennifer Grey peels back all the artifice, denial, obfuscation, and myriad assumptions and exposes a gorgeous, human portrait of her life, hard lived-in and fiercely fought for. Her chapter titles alone show the insights and whimsy that she brings to her memoir, along with the shattering public and private struggles and successes. It’s miles deep, sharply personal, bracingly honest—and if there’s anybody who deserves to step out of the corner into the light of her mind and indomitable spirit, it’s Jennifer Grey.”—Jamie Lee Curtis

“We all know Jennifer Grey as a talented actress, but Out of the Corner introduces us to a gifted writer. In reading her memoir, I understood the passion, love, and loss that has given shape to her life’s journey. Her narrative is nuanced, her words carefully chosen for maximum impact. She shares achingly human moments, like what it was like as a little girl to watch her father, the iconic Joel Grey, as he applied his greasepaint before taking the stage in Cabaret. Out of the Corner is a revelation, a work of emotional generosity and personal courage. It’s sneaky brilliant. Love it and love Jennifer. Baby got Book.”—Michael J. Fox

“The Dirty Dancing star cracks open her turbulent past in this searing and heartfelt debut . . . Grey emerges as a resilient star in her own story, candidly sharing with readers all her joy, confusion, and hard-won wisdom along the way. Fans won’t want to miss this.”—Publishers Weekly (starred review)

“An actor’s intimate self-portrait. In a gossipy, lively memoir, Grey chronicles her evolving sense of identity. . . . A spirited look at stardom.”—Kirkus Reviews