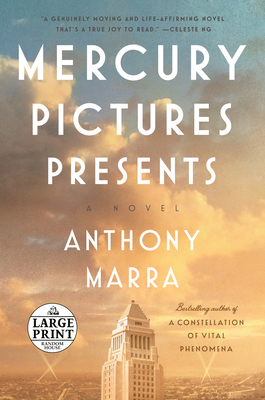 Anthony Marra, one of my favorite authors, is back with brilliance! I felt I was on a movie set while reading this book. The characters felt live, the descriptions jumped off the pages, and the historical setting was extremely vivid. Although centered on the character Maria, each peripheral story lends itself to one epic tale set in both Mussolini’s Italy and Hollywood. Here’s one not to miss!

Anthony Marra makes it evident just how much thought goes into his writing. His first two novels: phenomenal. Mercury Pictures Presents is no exception. Marra paints us a thoroughly researched world full of fascinating characters whose stories ripple into others. Follow Maria Lagana from Italy to Hollywood in search of new beginnings. If you enjoy this book just a fraction as much as I did, you too will be counting down the days 'til Marra's next release.

NEW YORK TIMES BESTSELLER • The epic tale of a brilliant woman who must reinvent herself to survive, moving from Mussolini’s Italy to 1940s Los Angeles—a timeless story of love, deceit, and sacrifice from the award-winning author of A Constellation of Vital Phenomena

ONE OF THE BEST BOOKS OF THE YEAR: NPR

Like many before her, Maria Lagana has come to Hollywood to outrun her past. Born in Rome, where every Sunday her father took her to the cinema instead of church, Maria immigrates with her mother to Los Angeles after a childhood transgression leads to her father’s arrest.

Fifteen years later, on the eve of America’s entry into World War II, Maria is an associate producer at Mercury Pictures, trying to keep her personal and professional lives from falling apart. Her mother won’t speak to her. Her boss, a man of many toupees, has been summoned to Washington by congressional investigators. Her boyfriend, a virtuoso Chinese American actor, can’t escape the studio’s narrow typecasting. And the studio itself, Maria’s only home in exile, teeters on the verge of bankruptcy.

Over the coming months, as the bright lights go dark across Los Angeles, Mercury Pictures becomes a nexus of European émigrés: modernist poets trying their luck as B-movie screenwriters, once-celebrated architects becoming scale-model miniaturists, and refugee actors finding work playing the very villains they fled. While the world descends into war, Maria rises through a maze of conflicting politics, divided loyalties, and jockeying ambitions. But when the arrival of a stranger from her father’s past threatens Maria’s carefully constructed facade, she must finally confront her father’s fate—and her own.

Written with intelligence, wit, and an exhilarating sense of possibility, Mercury Pictures Presents spans many moods and tones, from the heartbreaking to the ecstatic. It is a love letter to life’s bit players, a panorama of an era that casts a long shadow over our own, and a tour de force by a novelist whose work The Washington Post calls “a flash in the heavens that makes you look up and believe in miracles.”

Anthony Marra is the New York Times bestselling author of The Tsar of Love and Techno and A Constellation of Vital Phenomena, winner of the National Book Critics Circle’s John Leonard Prize and the Anisfield-Wolf Book Award, and longlisted for the National Book Award.

“With Mercury Pictures Presents [Marra] cements himself as one of the most deft and most enjoyable novelists working today. . . . I could go on for pages about my admiration for Marra’s technique and execution . . . but what I most recall is the general warmth of feeling every time I picked up the book and spent time in that world.”—Chicago Tribune

“Marra unspools this period comedy with so much old-time snappy wit that Mercury Pictures Presents should come with popcorn and a 78-ounce Coke.”—Ron Charles, Washington Post

“Crackling with wit and suffused with insight, Anthony Marra’s new novel is as epic in sweep as a movie set yet delineates the inner workings of the human heart with a miniaturist’s precision. Mercury Pictures Presents explores the endless give-and-take between life and art, the cost of integrity, and the ways we must make peace with the past in order to move toward the future.”—Celeste Ng, author of Little Fires Everywhere

“Marra has been compared to Nabokov, Kafka, and Orwell. The word 'brilliant' gets used in all his reviews. Mercury Pictures Presents runs from Mussolini's Italy to 1940s Hollywood, and is full of history, comedy, and horror. It's a great literary read.”—Ann Patchett, author of The Dutch House

“Marra has ascended to the top of the literary ranks.”—Booklist (starred review)

“A wonder—intimate and sweeping, heartfelt and satirical, one of the funniest and most moving novels I’ve read in a long time.”—Jess Walter, author of Beautiful Ruins

“Smart, heartfelt, and sneakily funny, Mercury Pictures Presents has all the breadth and power of an epic and the attention to detail of an intimate conversation. I read it in a state of admiration for the beauty Marra has wrung from the English language.”—Sara Nović

“A novel so rich and wondrous, written with such grace and wit, that there’s only one word for Anthony Marra: genius.”—Sally Mann

“I laughed aloud many times, even as I marveled.”—Aimee Bender

“An energetic, wildly comical tale . . . Amid all the action and plot twists, it's also a serious examination of immigration and xenophobia, identity and impersonation, and art, propaganda and censorship.”—BookPage