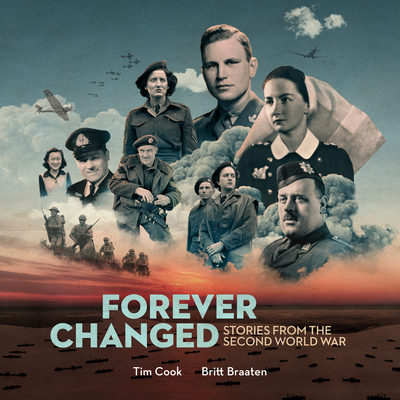 By Tim Cook, Britt Braaten
$9.95
Email or call for price.

This is book number 26 in the Souvenir Catalogue series.

The Second World War was a global war. But its effects were felt by every Canadian.

From the parachutist penning one last letter before being dropped into danger, to the ?bomb girl? who was burned on the job. From the prisoner of war who turned to art to endure the misery, to the Japanese Canadian teenager made to move 600 kilometres from home. Although the Second World War was unprecedented in both scope and scale, it was individuals that experienced it in all its brutality and glory.

To mark the 75th anniversary of the end of the Second World War, the Canadian War Museum has developed this souvenir catalogue. Personal photographs, letters and artifacts bring the stories of 26 Canadians to life. Forever Changed ? Stories from the Second World War uses eye-witness accounts to explore the human side of war for those in Canada and around the world.