In the Heart of the Sea: The Tragedy of the Whaleship Essex (Hardcover) 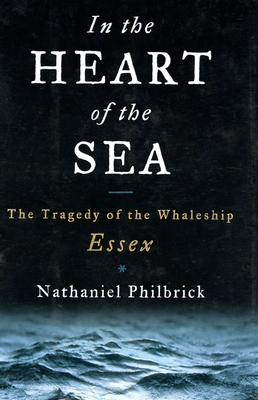 By Nathaniel Philbrick
$29.00
Email or call for price

From the New York Times bestselling author of Valiant Ambition and In the Hurricane's Eye, the riveting and critically acclaimed bestseller and a major motion picture starring Chris Hemsworth, directed by Ron Howard

"With its huge, scarred head halfway out of the water and its tail beating the ocean into a white-water wake more than forty feet across, the whale approached the ship at twice its original speed--at least six knots. With a tremendous cracking and splintering of oak, it struck the ship just beneath the anchor secured at the cat-head on the port bow. . ."

In the Heart of the Sea brings to new life the incredible story of the wreck of the whaleship Essex--an event as mythic in its own century as the Titanic disaster in ours, and the inspiration for the climax of Moby-Dick. In a harrowing page-turner, Nathaniel Philbrick restores this epic story to its rightful place in American history.

In 1820, the 240-ton Essex set sail from Nantucket on a routine voyage for whales. Fifteen months later, in the farthest reaches of the South Pacific, it was repeatedly rammed and sunk by an eighty-ton bull sperm whale. Its twenty-man crew, fearing cannibals on the islands to the west, made for the 3,000-mile-distant coast of South America in three tiny boats. During ninety days at sea under horrendous conditions, the survivors clung to life as one by one, they succumbed to hunger, thirst, disease, and fear.

In the Heart of the Sea tells perhaps the greatest sea story ever. Philbrick interweaves his account of this extraordinary ordeal of ordinary men with a wealth of whale lore and with a brilliantly detailed portrait of the lost, unique community of Nantucket whalers. Impeccably researched and beautifully told, the book delivers the ultimate portrait of man against nature, drawing on a remarkable range of archival and modern sources, including a long-lost account by the ship's cabin boy. At once a literary companion and a page-turner that speaks to the same issues of class, race, and man's relationship to nature that permeate the works of Melville, In the Heart of the Sea will endure as a vital work of American history.

Nathaniel Philbrick is the author of In the Heart of the Sea, winner of the National Book Award; Mayflower, finalist for the Pulitzer Prize; Bunker Hill, winner of the New England Book Award; Sea of Glory; The Last Stand; Why Read Moby Dick?; and Away Off Shore. He lives in Nantucket.

"Fascinating...One of our country's great adventure stories...when it comes to extremes, In the Heart of the Sea is right there."--The Wall Street Journal

"A book that gets in your bones...Philbrick has created an eerie thriller from a centuries old tale....Scrupulously researched and eloquently written...it would have earned Melville's admiration."--The New York Times Book Review

"[Told] with verve and authenticity...a classic tale of the sea."--San Francisco Chronicle

"Nathaniel Philbrick has taken one of the most horrifying stories in maritime history and turned it into a classic....One of the most chilling books I have ever read."--Sebastian Junger, author of The Perfect Storm