Heart of Europe: A History of the Holy Roman Empire (Paperback) 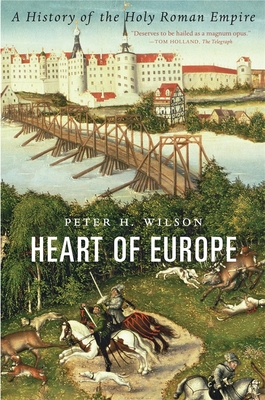 An Economist and Sunday Times Best Book of the Year

"Deserves to be hailed as a magnum opus."
--Tom Holland, The Telegraph "Ambitious...seeks to rehabilitate the Holy Roman Empire's reputation by re-examining its place within the larger sweep of European history...Succeeds splendidly in rescuing the empire from its critics."
--Wall Street Journal Massive, ancient, and powerful, the Holy Roman Empire formed the heart of Europe from its founding by Charlemagne to its destruction by Napoleon a millennium later. An engine for inventions and ideas, with no fixed capital and no common language or culture, it derived its legitimacy from the ideal of a unified Christian civilization--though this did not prevent emperors from clashing with the pope for supremacy. In this strikingly ambitious book, Peter H. Wilson explains how the Holy Roman Empire worked, why it was so important, and how it changed over the course of its existence. The result is a tour de force that raises countless questions about the nature of political and military power and the legacy of its offspring, from Nazi Germany to the European Union. "Engrossing...Wilson is to be congratulated on writing the only English-language work that deals with the empire from start to finish...A book that is relevant to our own times."
--Brendan Simms, The Times "The culmination of a lifetime of research and thought...an astonishing scholarly achievement."
--The Spectator "Remarkable...Wilson has set himself a staggering task, but it is one at which he succeeds heroically."
--Times Literary Supplement