For Honour's Sake: The War of 1812 and the Brokering of an Uneasy Peace (Paperback) 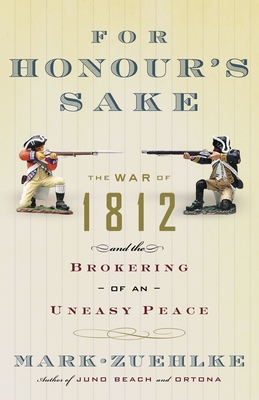 In the tradition of Margaret MacMillan’s Paris 1919 comes a new consideration of Canada’s most famous war and the Treaty of Ghent that unsatisfactorily concluded it, from one of this country’s premier military historians.

In the Canadian imagination, the War of 1812 looms large. It was a war in which British and Indian troops prevailed in almost all of the battles, in which the Americans were unable to hold any of the land they fought for, in which a young woman named Laura Secord raced over the Niagara peninsula to warn of American plans for attack (though how she knew has never been discovered), and in which Canadian troops burned down the White House. Competing American claims insist to this day that, in fact, it was they who were triumphant.

But where does the truth lie? Somewhere in the middle, as is revealed in this major new reconsideration from one of Canada’s master historians. Drawing on never-before-seen archival material, Zuehlke paints a vibrant picture of the war’s major battles, vividly re-creating life in the trenches, the horrifying day-to-day manoeuvring on land and sea, and the dramatic negotiations in the Flemish city of Ghent that brought the war to an unsatisfactory end for both sides. By focusing on the fraught dispute in which British and American diplomats quarrelled as much amongst themselves as with their adversaries, Zuehlke conjures the compromises and backroom deals that yielded conventions resonating in relations between the United States and Canada to this very day.

Mark Zuehlke is the author of many books about military history and the influence of the nation’s war experiences on Canadian society including Juno Beach, Holding Juno and The Gothic Line, a much-lauded trilogy tracing Canada’s role in the World War II Italian campaign; and The Canadian Military Atlas. He lives in Victoria, British Columbia.

“A more thrilling and erudite introduction to this chapter of Canadian history is hard to imagine.”
–Calgary Herald

“Zuehlke . . . presents a clear, thorough account of both the conflict and the peace negotiations that influenced and warped its outcome, and does so without bias. You couldn’t ask for a clearer account of events.”
–The Vancouver Sun

“Zuehlke’s extensive research and detail will not only appeal to academics, but his readable style and the well-paced flow will also intrigue lay historians with an interest in early nineteenth century Canada.”
–Winnipeg Free Press

Praise for the writing of Mark Zuehlke:

“Holding Juno is a meticulous, gripping story. . . . The scenes recounted here sometimes make the film The Longest Day seem tame by comparison . . . an eloquent accounting.”
–The Globe and Mail

“Mark Zuehlke’s grindingly researched book Ortona is a heart-stopping, intimate look at all the brutal excesses of war.” –Toronto Star