One of Windsor: The Untold Story of America's First Witch Hanging (Paperback) 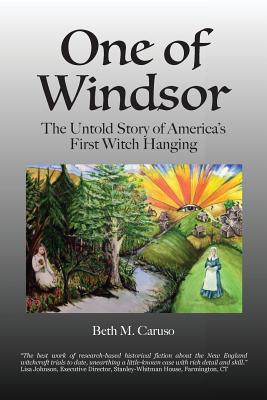 Alice, a young woman prone to intuitive insights and loyalty to the only family she has ever known, leaves England for the rigid colony of the Massachusetts Bay in 1635 in hopes of reuniting with them again. Finally settling in Windsor, Connecticut, she encounters the rich American wilderness and its inhabitants, her own healing abilities, and the blinding fears of Puritan leaders which collide and set the stage for America's first witch hanging, her own, on May 26, 1647. This event and Alice's ties to her beloved family are catalysts that influence Connecticut's Governor John Winthrop Jr. to halt witchcraft hangings in much later years. Paradoxically, these same ties and the memory of the incidents that led to her accusation become a secret and destructive force behind Cotton Mather's written commentary on the Salem witch trials of 1692, provoking further witchcraft hysteria in Massachusetts forty-five years after her death. The author uses extensive historical research combined with literary inventions, to bring forth a shocking and passionate narrative theory explaining this tragic and important episode in American history and in the life of Alice (Alse) Young, America's first witch hanging victim.