Sea Power: The History and Geopolitics of the World's Oceans (Hardcover) 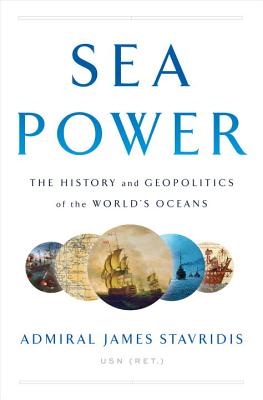 From one of the most admired admirals of his generation—and the only admiral to serve as Supreme Allied Commander at NATO—comes a remarkable voyage through all of the world’s most important bodies of water, providing the story of naval power as a driver of human history and a crucial element in our current geopolitical path.

From the time of the Greeks and the Persians clashing in the Mediterranean, sea power has determined world power.  To an extent that is often underappreciated, it still does. No one understands this better than Admiral Jim Stavridis. In Sea Power, Admiral Stavridis takes us with him on a tour of the world’s oceans from the admiral’s chair, showing us how the geography of the oceans has shaped the destiny of nations, and how naval power has in a real sense made the world we live in today, and will shape the world we live in tomorrow.

Not least, Sea Power is marvelous naval history, giving us fresh insight into great naval engagements from the battles of Salamis and Lepanto through to Trafalgar, the Battle of the Atlantic, and submarine conflicts of the Cold War. It is also a keen-eyed reckoning with the likely sites of our next major naval conflicts, particularly the Arctic Ocean, Eastern Mediterranean, and the South China Sea. Finally, Sea Power steps back to take a holistic view of the plagues to our oceans that are best seen that way, from piracy to pollution.

When most of us look at a globe, we focus on the shape of the of the seven continents. Admiral Stavridis sees the shapes of the seven seas.  After reading Sea Power, you will too. Not since Alfred Thayer Mahan’s legendary The Influence of Sea Power upon History have we had such a powerful reckoning with this vital subject.

Adm. Jim Stavridis, USN (Ret.) is a graduate of the U.S. Naval Academy who spent over 35 years on active service in the Navy. He commanded destroyers and a carrier strike group in combat and served for seven years as a four-star admiral, including nearly four years as the first Navy officer chosen as Supreme Allied Commander for Global Operations at NATO. After retiring from the Navy he was named the dean of The Fletcher School of Law and Diplomacy at Tufts University in 2013. He has written articles on global security issues for The New York Times, The Washington Post, and The Atlantic.

"No one understands the importance of the oceans and their impact on today's security better than Admiral Jim Stavridis. He is a leader and a sailor who stands out in every way. This is a must-read book.” —Senator John McCain

“Marvelous and essential... [Stavridis] not only describes what his subtitle promises—the history and geopolitics of the world’s oceans—but also seeks to accomplish something far more elusive, sophisticated, and significant: To show how service at sea in one of the world’s great global navies simultaneously expands tactical, operational, strategic, and policy knowledge and skills in an officer and—most important—develops insights in him or her regarding myriad possible interconnections among those levels of conflict…This is a book for all sailors and policymakers, and especially for those who are both.” —Proceedings Magazine

“Stavridis (Dean, Fletcher School of Law and Diplomacy/Tufts Univ.; The Accidental Admiral, 2014, etc.) knows his maritime history, but equally important is his firsthand knowledge of the seas as a naval officer who has steered ships and served as Supreme Allied Commander of NATO…He vividly relates what it felt like as a young naval officer taking a boat through the Panama Canal or the Torres Strait between Australia and New Guinea, and he adds personal authority to his more general points about the different bodies of water…A highly readable, instructive look at the role of the oceans in our civilization, past and present.” —Kirkus Reviews (starred)

“Stavridis strikes a perfect balancing tone between the theoretical and the personal; he's read widely in the annals of naval history, and he's also seen years of that history in the making…Sea Power is clear-eyed about the dangers of the modern nautical realities, but it doggedly retains this tone of hope throughout. And hope or danger, on one point the book compels agreement: the oceans are still the crucial theaters of this water world.” —Christian Science Monitor

“Stavridis, a retired U.S. Navy admiral, summons the collected knowledge of his extensive career as an operational commander to provide insight into navies’ routine functioning…It’s a stimulating and provocative work…a timely reminder that oceans may seemed tamed—but that’s only true on the surface.” —Publishers Weekly

"Admiral Jim Stavridis served as a Combatant Commander for nearly seven years, as NATO Supreme Allied Commander for four years, and knows the world well.  In Sea Power he turns his intellect to helping us understand the maritime world in clear, sharp strokes -- vital analysis in this turbulent century."  —Robert M. Gates, Secretary of Defense, 2008-11

"Fellow Admiral Jim Stavridis spent nearly four decades as a US Navy Sailor, and is well known as an important geopolitical thinker.  In Sea Power both of those attributes come together in creating a must read for anyone seriously thinking about the world's challenges in the 21st century." —Admiral Bill McRaven, USN (Ret.), Chancellor, The University of Texas System and former Commander, U.S. Special Operations Command

"Admiral Jim Stavridis has sailed the world's oceans, and has distilled the journey into a sharply observed geopolitical take on global affairs in the maritime sphere.  This is a Sailor's view of this turbulent nautical world, and it is a voyage worth taking." —Admiral Mike Mullen, USN (Ret), 17th Chairman of the Joint Chiefs of Staff and 28th Chief of Naval Operations