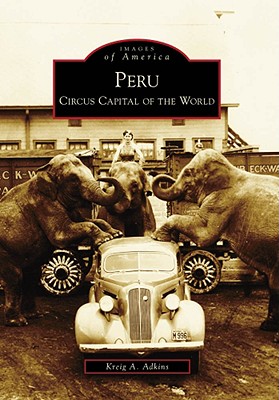 Venture into fascinating connection between Niles, Illinois and circus history with more than 200 vintage photographs and anecdotes from the locals who experienced it.

In April 1884, Ben Wallace, the owner of the local livery, opened the season of his new circus in Peru and billed it as Wallace and Company's Great World's Menagerie and International Circus. It was an instant success and soon grew to be one of the largest and most renowned circuses in American history.

Over the next 50 years, many circuses found a home in Peru. Under the direction of the American Circus Corporation, an industry was created in Peru that employed as many as 4,500 people. Circuses like the Hagenbeck-Wallace, John Robinson, and Sells-Floto/Buffalo Bill's Wild West Show departed Peru by rail each spring, along with some of the best acts from around the world, including Terrell "the Lion King" Jacobs; the world's favorite clown, Emmett Kelly; and animal trainer Clyde Beatty, who played himself in 12 Hollywood movies. In 1929, Ringling Brothers purchased the American Circus Corporation. As the country sank into the Depression, fewer circuses left Peru each season. In 1941, Ringling Brothers closed its winter quarters in Peru, ending an era.

Miami County historian Kreig A. Adkins has been a filmmaker for more than 20 years. With a passion for historical documentaries, Adkins wrote and directed the film On the Banks of the Wabash: The History of Peru, Indiana. Adkins and his children perform in the Peru Amateur Circus.