Women and Industry in the Balkans: The Rise and Fall of the Yugoslav Textile Sector (Paperback) 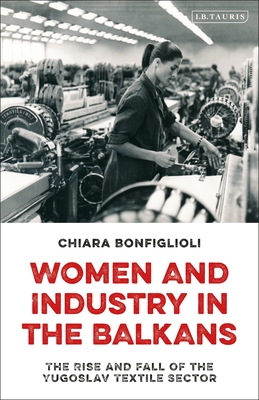 By Chiara Bonfiglioli
Email or call for price.

Women's emancipation through productive labour was a key tenet of socialist politics in post-World War II Yugoslavia. Mass industrialisation under Tito led many young women to join traditionally 'feminised' sectors, and as a consequence the textile sector grew rapidly, fast becoming a gendered symbol of industrialisation, consumption and socialist modernity. By the 1980s Yugoslavia was one of the world's leading producers of textiles and garments. The break-up of Yugoslavia in 1991, however, resulted in factory closures, bankruptcy and layoffs, forcing thousands of garment industry workers into precarious and often exploitative private-sector jobs. Drawing on more than 60 oral history interviews with former and current garment workers, as well as workplace periodicals and contemporary press material collected across Croatia, Macedonia, Serbia, Bosnia-Herzegovina and Slovenia, Women and Industry in the Balkans charts the rise and fall of the Yugoslav textile sector, as well as the implications of this post-socialist transition, for the first time.
In the process, the book explores broader questions about memories of socialism, lingering feelings of attachment to the socialist welfare system and the complexity of the post-socialist era. This is important reading for all scholars working on the history and politics of Yugoslavia and the Balkans, oral history, memory studies and gender studies.

Chiara Bonfiglioli is Lecturer in Gender & Women's Studies at University College Cork, Ireland. She has published and researched on gender history in Yugoslavia and post-Yugoslav states, as well as on transnational women's and feminist movements during the Cold War. More details can be found at www.chiarabonfiglioli.net