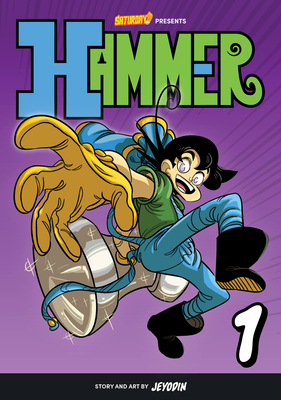 This is book number 1 in the Saturday AM TANKS / Hammer series.

Left on his own again, Stud gets sucked into one of his father’s journals down into an ocean kingdom grappling with the murder of its king. Can Stud use his hammer hands to solve the case?

Our hero Stud is a fourteen-year-old boy whose father regularly abandons him on expeditions that he regularly catalogs in his own journals. Having to fend for himself, Stud isn’t like most kids—he can turn his hands into hammers! Unfortunately, the kids in the village don’t think it’s cool and do not allow him to join their own fun adventures. Considering that his father has always advised him that friends are the most important accomplishment a person can make, what’s a boy who can turn part of his body into metal to do? Go on his own adventures, of course!

When Stud stumbles upon one of his father’s journals detailing his past adventures with Tara, Stud’s mother; our young hero unknowingly makes a wish. Using “wishing coins,” after reading a passage about them, Stud gets sucked into the book, and it is at the location of one of his parents’ adventures! While that would be weird enough, he’s fallen on top of a hammerhead shark by the name of Steele, who is suspected of killing the Ocean King.

Stranded in a water world and unable to breathe without special assistance, Stud’s in a bit of trouble. With no way home in sight, he attempts to finally make a friend who can help him and thus chooses to aid the Mermaid Detective trying to solve the murder case. Can Stud solve this problem with his shiny hammer hands? He’s going to try!

Hammer is rated Y for Youth, recommended for ages 10 and up.

Saturday AM, the world’s most diverse manga-inspired comics, are now presented in a new format! Introducing Saturday AM TANKS, the new graphic novel format similar to Japanese Tankobons where we collect the global heroes and artists of Saturday AM. These handsome volumes have select color pages, revised artwork, and innovative post-credit scenes that help bring new life to our popular BIPOC, LGBTQ, and/or culturally diverse characters.

Born in New Orleans, Louisiana, the manga artist Jey Odin attended Savannah College of Art and Design in 2010, where he majored in Sequential Art. In addition to Saturday AM, many top publishers have published this prolific artist, including Antarctic Press, USA Today, and Oni Press. Known for his infectious laugh, Jey’s hobbies are drawing and reading comics, watching movies, listening to music, and having fun in general. When not creating comics, Jey is a fan of spending time in his home in Georgia with his wife and two hilariously cute dogs!

Saturday AM is a unique digital comics brand featuring an ever-growing catalog of popular, exclusive, and diverse action manga-style webcomics by independent creators from around the world. Among the nearly 50 visionary artists on the Saturday AM team are @WhytManga (Apple Black), @JeyOdin (Hammer), and @saigaimiproject (Saigami). To learn more about Saturday AM, visit saturday-am.com, or find them on Instagram (@saturday_am), YouTube (youtube.com/user/MyFutprint), and Twitter (@saturday_am).

“Younger fans of action manga may be entertained.”—Kirkus Reviews

“The easy-to-follow story and action-packed art will have young fantasy-adventure fans eager for the next installment.”—Jonathan Khan, Booklist