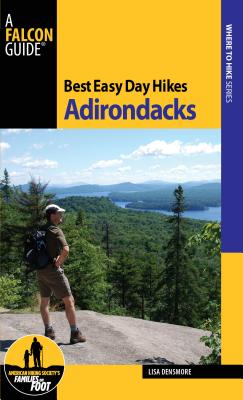 Best Easy Day Hikes Adirondacks directs you to some of the best short hiking trails in the area. This guidebook includes concise descriptions and detailed maps of mostly short, easy-to-follow trails that lead to some of the park's most scenic destinations.

Lisa Densmore has spent most of her life on the trail. She grew up hiking in the High Peaks region of the Adirondacks in part to stay fit for alpine ski racing. As a member of the U.S. Ski Team and later a pro ski racer, she hiked throughout the Adirondacks and other places in the northeast during the off-season. The mountains remained her training ground at Dartmouth College, where she became a lifetime member of the Dartmouth Outing Club. Though she is a resident of Hanover, New Hampshire, her family remains in the High Peaks regions of the Adirondacks (Saranac Lake) and she maintains a home on Chateaugay Lake at the northern edge of the Adirondack Park. At first, her time in the backcountry was strictly for fun and fitness, now it's her part of her profession as a writer, photographer and television producer/host. It is Lisa's television work that has made her a recognized authority on hiking and backpacking, particularly in the northeast. She has written, produced and hosted numerous shows and feature segments, including "Tricks of the Trail" (RSN) which won an International Teddy Award for "best instruction program devoted to the outdoors," and for "Gear Guide" (OLN) which won two Telly Awards. On "Windows to the Wild" (PBS), which is still on-air, Lisa takes viewers on hiking adventures where they can enjoy the scenic beauty of a particular wilderness area while learning about its natural history, flora and fauna. Lisa was also the co-host and field producer for "Wildlife Journal" (PBS) for which she received three Emmys(c)! On "Wildlife Journal," Lisa introduced viewers to various backcountry activities - including hiking and camping - with an emphasis on safety and conservation. Lisa is also an award-winning freelance writer and a nationally recognized nature photographer whose articles and images have appeared in magazines as diverse as "Adirondack Life," "Backpacker" and "Women in the Outdoors." She has published literally hundreds of articles over the last two decades. She is also the author of six books: "Ski Faster" (McGraw-Hill, 2000), "Best Hikes with Dogs: New Hampshire & Vermont" (The Mountaineers Books, 2006), "Hiking the Green Mountains" (FalconGuides, 2009), "Hiking the White Mountains" (FalconGuides, 2010), "Backcountry Basics: Weather" (FalconGuides, 2010), and this book.