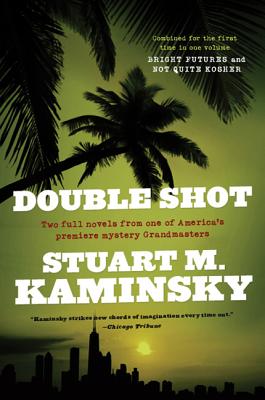 Abe Lieberman: a strong, sympathetic Chicago cop. His love for his family is matched by his quiet, zealous commitment to do what is right. Sometimes he's faced with some uncomfortable ethical choices in order to see that justice—rather than the letter of the law—is meted out.

Lou Fonesca: a world-weary guy who got in a car and just started driving after his wife died and wound up in front of a Dairy Queen in Sarasota. He now makes his way amid bail jumpers and lost wives, solving the little cases and trying to get by.

What do these two men have in common? They are both created by one of America's best loved mystery authors, Stuart Kaminsky. Putting two of his most beloved series into one volume gives readers an introduction into Kaminsky's world.

Not Quite Kosher and Bright Futures and are two full length novels that Kaminsky fans will cheer at. Double Shot introduces new readers to a national treasure in the mystery field.

Stuart M. Kaminsky was the author of more than 60 novels and an Edgar Award winner who was given the coveted Grand Master Award by the Mystery Writers of America. His series include the Lew Fonesca, Inspector Rostnikov, Toby Peters, and Abe Lieberman mysteries, which includes such titles as Terror Town, The Last Dark Place, and Not Quite Kosher. He passed away in the fall of 2009.

“Superb…Kaminsky provides enough twists and turns to keep most readers guessing, but the book's power comes from the compelling portrayal of Fonseca.” —Publishers Weekly (starred review) on Bright Futures

“Kaminsky sees goodness in the oddest characters, which is why Lew is still alive, and why we're still reading.” —New York Times Book Review on Bright Futures

“Veteran Chicago cop Abe Lieberman, whether viewed on the job, on a synagogue committee, or in his family circle, is one of the most engaging, unpredictable, and fully realized characters in detective fiction.” —Ellery Queen on Not Quite Kosher

“If Edgar Award winner Kaminsky were any more prolific, he'd have to be listed as part of the GNP....a complex, diverting puzzle for which Kaminsky is famous.” —Booklist (starred) on Not Quite Kosher