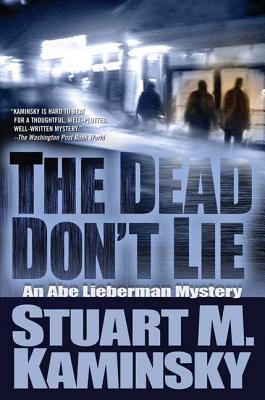 The Dead Don't Lie is the latest in Edgar Award winner and MWA's Grand Master Stuart Kaminsky's Abe Lieberman mystery series. Lieberman and his partner, Bill Hanrahan, are hell or heaven bent on making the mean streets of Chicago just a little safer.

As usual they have their hands full. Three prominent members of the Turkish community are all brutally murdered and Lieberman must find out what, if anything, ties these murders together. It doesn't help that the key to the puzzle might be an event that took place over a century ago.

Bill Hanrahan finds himself assigned to a case where a hospitalized chef claims to have been beaten by two people and shot by a third, a bespectacled Chinese man. As Bill digs deeper he finds himself at odds with an old nemesis, a man who has an unusual affinity for Bill's wife.


Both Lieberman and Hanrahan struggle to do the right thing even if it means bending the letter, not the spirit, of the law.

Stuart M. Kaminsky was the author of more than 60 novels and an Edgar Award winner who was given the coveted Grand Master Award by the Mystery Writers of America. His series include the Lew Fonesca, Inspector Rostnikov, Toby Peters, and Abe Lieberman mysteries, which includes such titles as Terror Town, The Last Dark Place, and Not Quite Kosher. He passed away in the fall of 2009.

“Managing to be genuinely scary when describes urban crime, Kaminsky also is blessed with a subtle irony about his character.” —Publishers Weekly (starred review) on Terror Town

“Jam-packed with the stuff of good crime fiction-character, style, place, recognizable human conflict.” —The Washington Post on The Big Silence

“Perhaps it is time to declare award-winning Stuart Kaminsky as the reigning monarch of excellent detective series.” —Midwest Book Review

“Kaminsky has the pro's knack of combining quirky people, succinct descriptions, an eye for detail, and dark humor to produce entertainment at its best.” —Chicago Sun-Times