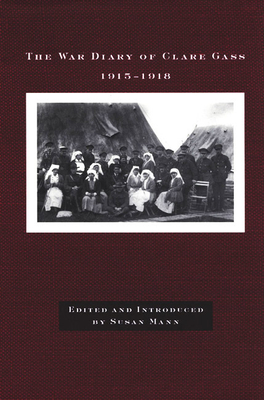 During the First World War Clare Gass spent four years as a lieutenant and nursing sister in the medical corps of the Canadian Expeditionary Force. The War Diary of Clare Gass documents her daily experiences, from the beginning of her military training in 1915 to her return from Europe in 1918. Gass records the sights and sounds and smells of war as well as quoting the then-unknown "In Flanders' Fields," written by her colleague Dr John McCrae. Well aware that her work was an exceptional experience for a woman, she made the most of her time, whether nursing, exploring the countryside around the hospital, or taking photographs. Her lively personality and passion for her work shine through the diary and offer a unique perspective on the Canadian contribution to the war effort. The diary reveals a woman who took it for granted that she should do everything possible to aid the war effort and details her care of the sick and wounded at No. 3 Canadian General Hospital (McGill), forty miles behind the trenches, as well as at No. 2 Canadian Casualty Clearing Station, where she was within range of the shells. Combined with Susan Mann's sensitive and thoughtful introduction, the Gass diary provides a fresh look at Canadian participation in the First World War. It will appeal to a wide range of readers with an interest in military history, women's history, medical history, gender and war, diaries, and the history of nursing.

Susan Mann is a historian and president emeritus of York University.

"A fresh contribution to our understanding of the military and medical history during this period, shedding light on the ambivalent attitudes towards the war that were held by the people closest to it. Mann's introduction is sensitively written, and reveals that the editor has done considerable background research on the subject." Jonathan F. Vance, author of Death So Noble: Memory, Meaning, and the First World War

"A major contribution to the field of Canadian military and women's history. Not only does Mann bring into the public domain a primary source hitherto unknown to scholars, but she also uses her splendid introduction to offer a timely critique of military and nursing history that continues to quickly pass over the work of the Nursing Sisters. The diary is exceedingly rich in detail and throughout offers evidence of the emotional turmoil and war weariness that we hope to find in primary sources. Unlike many diaries that become repetitious and boring, this one often delights and surprises. I read it in one gulp and wished for more." Margaret Conrad, Department of History, Acadia University