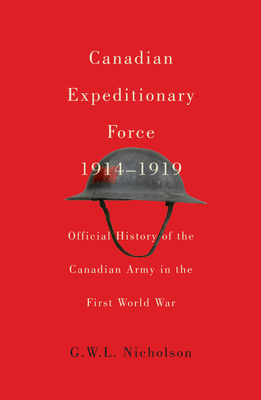 This is book number 235 in the Carleton Library Series series.

Colonel G.W.L. Nicholson's Canadian Expeditionary Force, 1914-1919 was first published by the Department of National Defence in 1962 as the official history of the Canadian Army’s involvement in the First World War. Immediately after the war ended Colonel A. Fortescue Duguid made a first attempt to write an official history of the war, but the ill-fated project produced only the first of an anticipated eight volumes. Decades later, G.W.L. Nicholson - already the author of an official history of the Second World War - was commissioned to write a new official history of the First. Illustrated with numerous photographs and full-colour maps, Nicholson’s text offers an authoritative account of the war effort, while also discussing politics on the home front, including debates around conscription in 1917. With a new critical introduction by Mark Osborne Humphries that traces the development of Nicholson’s text and analyzes its legacy, Canadian Expeditionary Force, 1914-1919 is an essential resource for both professional historians and military history enthusiasts.

Colonel G.W.L. Nicholson (1920-1980) served with the Prince Albert Volunteers and worked for the Historical Section of the Canadian military, with appointments in London and Ottawa, from 1943 until his retirement in 1961. He is the author of Marlborough and the War of the Spanish Succession, The Canadians in Italy, 1943-1945, and The Fighting Newfoundlander. Mark Humphries is associate professor of history and Dunkley Chair in War and the Canadian Experience at Wilfrid Laurier University.

"More than fifty years after it was first published, Nicholson’s official army history still remains the definitive account of the Canadian Expeditionary Force’s operations during World War I." Mark Zuehlke, author of The Canadian Battle Series