Waging the War of the Worlds: A History of the 1938 Radio Broadcast and Resulting Panic, Including the Original Script (Paperback) 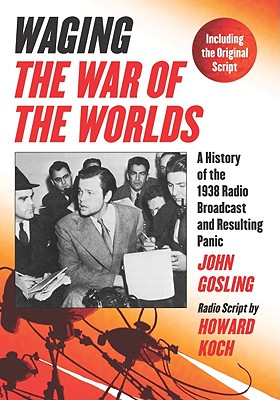 The 1938 Orson Welles broadcast of The War of the Worlds was a landmark in the history of entertainment, sparking public hysteria in America and a series of broadcasts around the world that elicited similar responses. This book examines all aspects of the historic broadcast in depth, including fascination with Mars, H.G. Wells' novel, Orson Welles and the making of the broadcast, initial reactions and the resulting "fog of war," anxieties underlying the panic, and the aftermath. Additional chapters look at later broadcasts in the United States, Brazil, elsewhere in Latin America, and Portugal, and address the likelihood that a similar panic could happen again. The Howard Koch original script of the 1938 The War of the Worlds radio broadcast is included.

John Gosling has written many articles for British science fiction magazines and runs a highly respected War of the Worlds website (www.war-of the-worlds.co.uk).